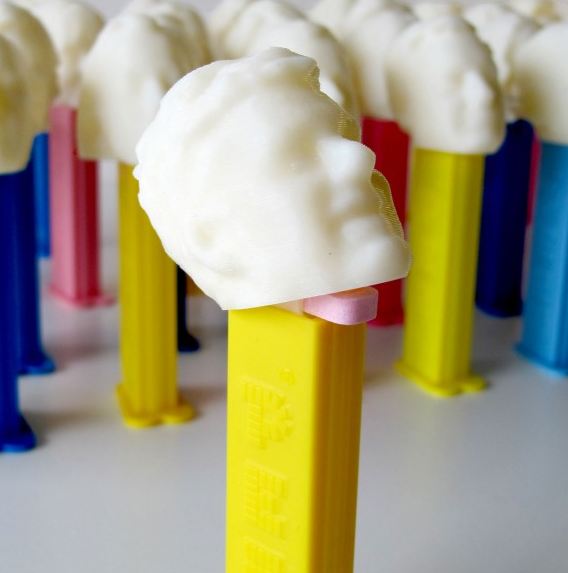 Popularised by those candy-loving Americans, PEZ has become a worldwide recognised brand and there are many devoted devourers out there who would pay a sweet buck for those desirable and kitsch dispensers used to store the sweets.

Popular franchises have been immortalised in plastic and characters from Disney, Marvel Comics, Star Wars and Star Trek have become PEZ heads in the Austrian-originating confectioner’s 86 years of saccharin service.

What does this have to do with gadgets, you might be asking?

Well, a third party company and maker of plastic jewellery named Hot Pop Factory has expanded its repertoire to now include custom 3D printed PEZ heads and can make us regular Joes into sweet spitting sculpts thanks to Microsoft’s Xbox Kinect and it’s super-sensitive scanning tech. Makes a bit more sense why the Gadget Helpline is talking about candy now, right?

The idea came about when a company approached Hot Pop Factory founders and designers Matt Compeau and Bi-Ying Miao asking for a something uniquely special as a Christmas treat for its 32 members of staff. Popping the heads of some PEZ Disney princesses and painstakingly scanning each worker as a 3D digital model with the Kinect system, the disembodied bonces were then squeezed out of a high tech 3D printing machine and affixed on top of the chamber part making them functional candy-givers.

The result was an office full of one-of-a-kind dispensers and big smiles all round at the yule bash!