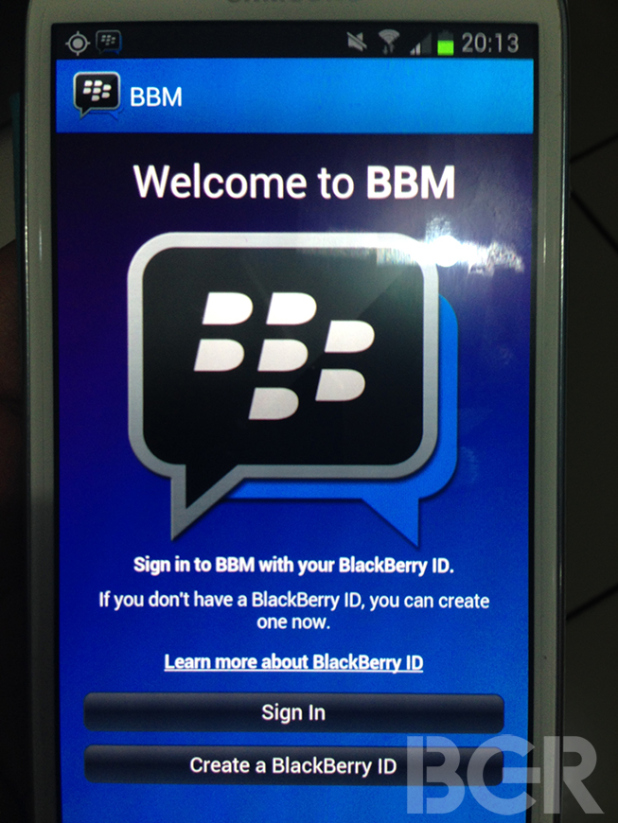 It’s been long rumoured and much requested for many years, but BlackBerry appears to be on the final stages of releasing an app based version of its BlackBerry Messenger service that will see the free messenger land on Android based devices.

If you were to go back three years, the news of BBM landing on non-BlackBerry devices would have shocked the technology world and may have even propelled BBM into the forefront of cross-platform messaging, but with the arrival of free to use messaging services such as WhatsApp, iMessage and Facebook Messenger, BBM on Android isn’t as much of a big deal as it once could have been.

Well, regardless of BlackBerry’s timing issues it’s looking like the company is finally getting close to releasing its BBM Android app. A leaked image of the app’s login screen has been snapped and put online and its shows the BBM service working on what looks like a Samsung Galaxy S3 handset.

BGR leaked the image and stated that they cannot show any more due to “identifying marks” which would get the image source in trouble. BGR also reports that the BBM app “isn’t bad” and should be released in the not-too-distant future.

BlackBerry has already announced plans to bring the messenger service to iOS and Android by the end of summer 2013 so we can expect the release in the next few weeks. We are not sure how many users still have a BlackBerry ID and if a trip back in time to the days of BlackBerry past will help the ailing company.

It’s been a long road for BlackBerry and the BBM service, but that road could be coming to an end soon – or will BBM on rival platforms pave a new path for the company?