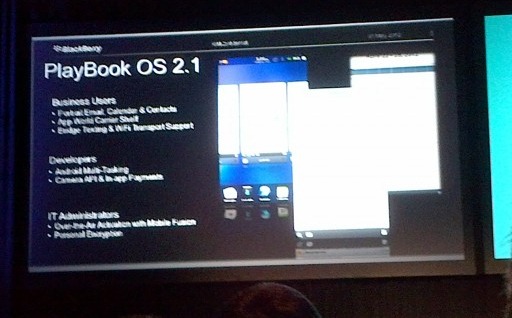 BlackBerry PlayBook 2.0, the much-anticipated and much-needed tablet operating software update from RIM, arrived little over three months ago on February 21st. Now, a tweet from PlayBook Product Manager Michael Clewley suggests that the good progress for the once struggling tablet will continue today with a further update to PlayBook 2.1.

The February upgrades brought new features and apps including native email, calendar and contacts – things which were noticeably and disappointingly absent from the gadget’s launch. Missing out on some of these crucial features may have cost the BlackBerry PlayBook a few potential owners after a promising hype campaign which built the tablet up as a true iPad contender.

BlackBerry Playbook 2.1 should start rolling out as a Beta version on our RIM multimedia-based tablets today, and Chewley’s tweet advises us of an “end of May” launch for some new as of yet unknown app additions (we’re still missing out on a tablet version of the popular BBM – BlackBerry Messenger). Judging by the date these new features should be arriving any minute now.