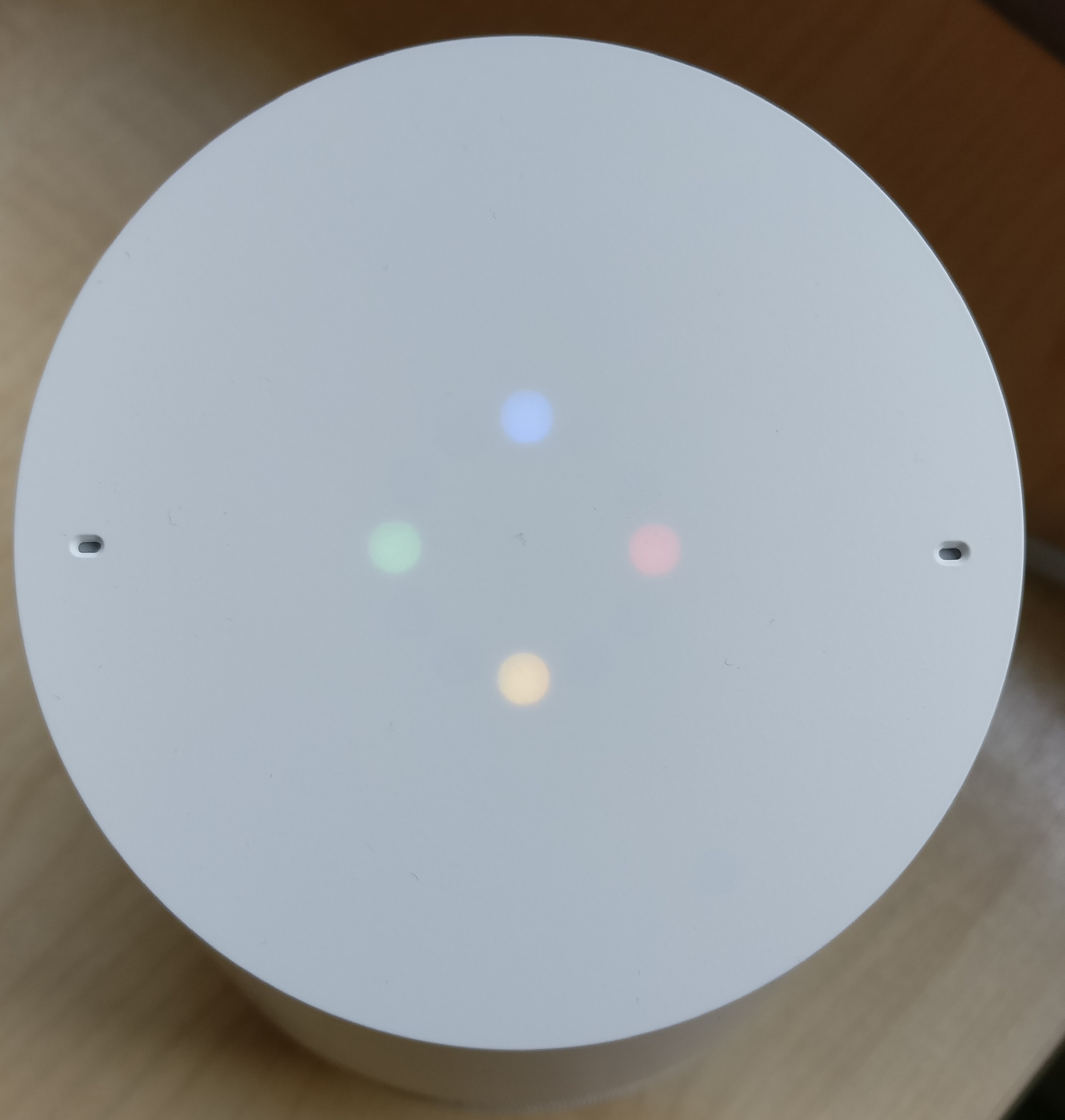 Google Home is the multinational tech companies answer to the Amazon Echo which is, already, moving off the shelves swiftly. The personal assistant slash home speaker from Google costs £129 and is now available to purchase from online retailers in the U.K.

Google were kind enough to send us one to review at the Gadgethelpline.

As you can see, the rear of the device shows a single button, this disables/enables the inbuilt far-field microphones.

Upon opening the well crafted box that contains your new assistant you will find one Google Home, a small info pack and one power adaptor. As you can see from the pictures shown, this device only needs a power connection to function, the rest is wireless.

So, before you rush full steam ahead plugging it in there is one thing you will need to do. First off, install Google Home on your computer, tablet or phone then plug in Google Home before loading the app.

Make sure the device running the app is on wifi, then load Google Home. If it does not automatically detect the Home device then you will need to tap the icon on the top right which will then show you the devices in range and give you the option to either ignore or go through setup.  We have included screenshots of the setup process below:

[ngg_images source=”galleries” container_ids=”3″ display_type=”photocrati-nextgen_basic_slideshow” gallery_width=”600″ gallery_height=”500″ cycle_effect=”fade” cycle_interval=”30″ show_thumbnail_link=”1″ thumbnail_link_text=”[Show thumbnails]” order_by=”sortorder” order_direction=”ASC” returns=”included” maximum_entity_count=”500″]Once you have completed the setup process then Google should now be available to assist you with every whim.

Using the device once it is setup:

Google Home will try to answer all of your questions, just remember to phrase your question correctly,  “Okay Google” or “Hey, Google” should work every time and bring the device to life.

Google Home will link with existing devices you have such as Google Chromecast and other Wifi devices almost seamlessly. Once you have set up the respective app/device in Google Home you can then ask Google to assist you.
For example: OK Google, Load Netflix, Play Bojack Horseman episode 1…

Google Home can also play music you cast to it from Apps such as Google Play Music.

We tested the sound with a podcast and for a small speaker, the bass seems crisp and the trebles are clear.

Google have also adapted the voice of its assistant to be British and the system behind its operation has been enhanced to recognize the variety of vocal tones from around the U.K. When you consider the number of local dialects in the U.K., this is quite impressive.

When asked how many languages Google Home speaks it answered with an extensive list and explained that it will be adding more. Home can repeat a phrase for you and almost lends itself to be a language learning assistant as you can ask Home to repeat the phrase while you practice it.

The top of the Home device is a touch sensitive surface which can be operated with a small tap, you can also turn the volume up and down by moving clockwise or anti-clockwise around the colored circle.

As well as internal microphones, there is also 802.11ac Wi-Fi, a speaker system and Bluetooth capability, the latter being unavailable at launch though.

With regards to the device itself, it is easy to set-up, the speakers are good and can be heard clearly both near and far. Google are already known in the field of AI (Deepmind etc)so we expect to see many improvements on this device over the next few months.

Due to only having the device running for a few hours you can expect the full review a little further down the line when it has been extensively tested.

The setup and first impression for Google Wifi will be coming tomorrow so watch this space!