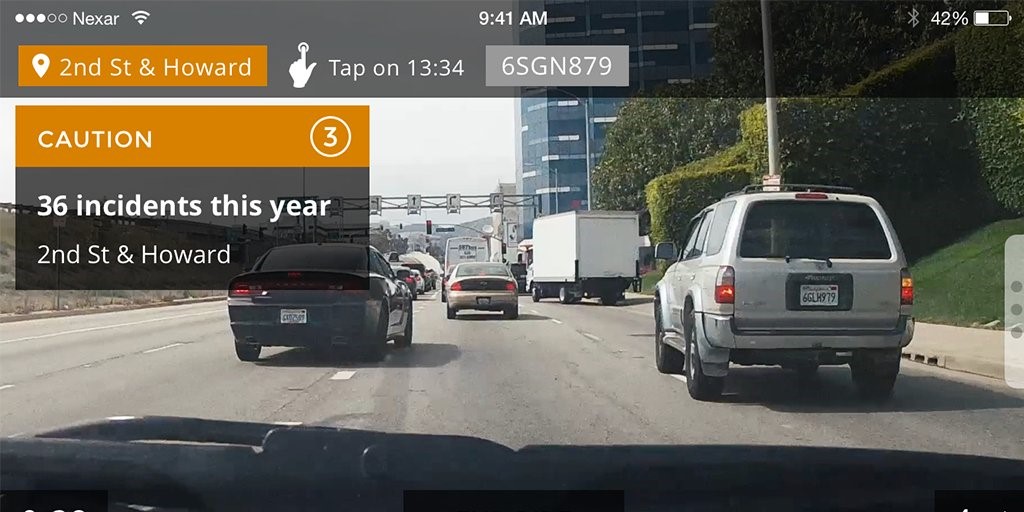 When it comes to exciting the senses, dash cams are not usually the first things that spring to mind. Becoming popular over the last few years their number has grown, and today, there are a plethora of designs, brands and prices to choose from.

The raw footage from dashcams alone has spawned a complete subset of crash-porn on YouTube, and in some countries it is pretty much common place to install these for insurance purposes.

This clever little beastie does all the standard dashcam tricks; detect hard braking, auto record collisions etc. and then some.  Welcome additions are instant Cloud backup and voice activation. What make this particular dashcam app stand out from the crowd is a feature that the developers will be releasing later this year called “real-time warnings”.

What this clever little feature does is single out the individual cars that Nexar believes you, as a driver, should be avoiding like the plague.

Nexar are building a database of bad drivers, potholes and dangerous intersections and the app has already recorded over 5 million miles of driving around Manhattan, The Bay Area and Tel Aviv.

The app is available for free on iOS (Android version in the pipeline too). It uses the camera combined with machine vision and AI algorithms to identify car number plates and track location, velocity and trajectory of each individual vehicle on the road around you.

So if a boy racer flies past at well over the speed limit or pulls a u-turn on the motorway, the info is captured and added to the database. Next time the same perpetrator comes near you it will be detected and an alert will be given.

The bad driver detection feature isn’t supposed to go live until later this year but the implications have caught the attention of investors and car companies/insurers alike, and will most probably prompt privacy concerns to boot!

Find out more about the Nexar Dashcam App at www.getnexar.com.

Also See: Why Get a DashCam?

The Gadget Helpline can help you with a wide range of dashcams, GPS devices as well as the more common smartphone and laptop woes. Check out the membership benefits and sign-up to start your 30-day trial!