A Second Fix of Daredevil Coming to Netflix – Season 2 Confirmed

With Marvel’s Daredevil enjoying a successful first season over on Netflix those who have binge watched the series are already eager to see more justice served and the streaming network are prepared to deliver by officially confirming a second season for next year. 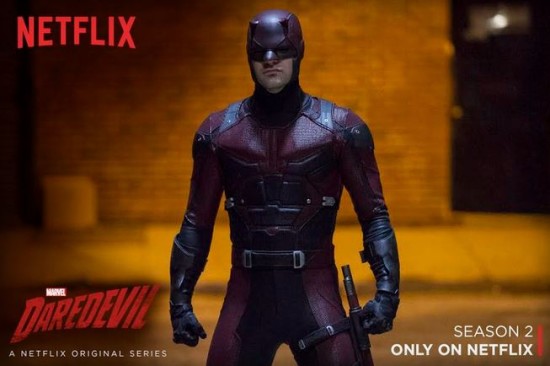 A full first season of Daredevil went live on Netflix almost a fortnight ago and set the Marvel Cinematic Universe in a gritty new direction. This ain’t the colourful and family-friendly Avengers or Agents of S.H.I.E.L.D where the heroes always win and Matt Murdock’s crime-fighting alter-ego has taken a very brutal war to the bad guys of Hell’s Kitchen – as well as taking a few hard bumps himself.

The show’s first run has been applauded by fans and online critics for its mature themes, engrossing storytelling and particularly that it shows the human side of life as a super-hero. The titular vigilante doesn’t even have an ‘iron suit’ or a ‘magic hammer’ one crook remarks in an early episode, a delightful Avengers reference that really reflects a key theme of the Daredevil series.

Daredevil will get a well-deserved second season in 2016, so still plenty of time to finish the first set of episodes if you haven’t already. A number of the first season cast will be returning (who we won’t name, as not to spoil) and we should expect crossovers with the other shows released in the Marvel/Netflix line-up before The Man Without Fear returns.

Despite no plot details being revealed it has been announced that showrunner Steven McKnight will be passing the billy club to Doug Petrie (Buffy The Vampire Slayer) and Marco Ramirez (Sons of Anarchy) so we feel the show is in safe hands, and a tweet from Netflix shows a fully costumed Daredevil and a caption stating ‘Fisk was just the beginning.’

Fisk was just the beginning. The first Defender is back for Season 2 of @Daredevil. #Daredevil pic.twitter.com/GuE30lK8qt

For an example of why Daredevil has proved so popular with Netflix viewers just check out the superb action below, a one take fight scene from Season one Episode 2.