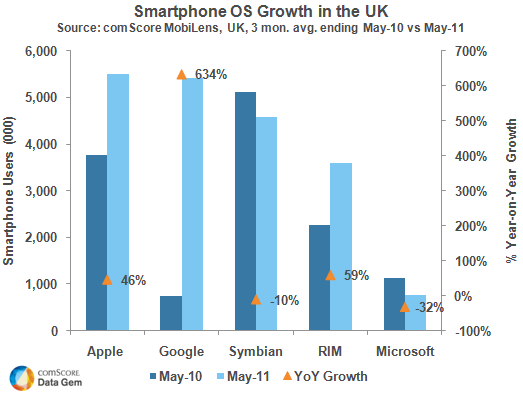 ComScore has just released some new figures showing the word domination of Android, which is coming along nicely at a freakishly fast pace.

We all know that Android phones are dominating the market at the moment with a reported 500,000 devices activated monthly, and with the OS still being relatively infantile, the growth shown is immense.  The market share of Google’s Android OS grew at a rate of 634 percent during May 2011 in the UK, in the past year.

In comparison, iOS’ market share only grew by 46%, which although miniscule compared to Android, still outperforms both Microsoft and Symbian, whose market shares fell by 32 and 10 percent respectively.

The graph shows that iOS is ahead of Android by 0.4 percent overall, but looking at the figures Android must not have even had time to steal a quick look at Apple’s patents as it whizzed past. Even RIM seem to be keeping up with the game, showing a positive growth of 59 percent which is good considering the company has nearly been written off by some technology writers recently.

Android, iOS or other? Which is your favourite and why?

UPDATE: RIM have issued a statement regarding the ComScore data, which they believe to be pretty inaccurate. Read the full statement below:

RIM is committed to providing its customers with the very best BlackBerry experience and is proud to be the UK’s #1 smartphone brand*.  RIM has experienced strong international growth, with 67% of revenue in Q1 FY12 derived from international markets.  The UK plays an important role in RIM’s international growth along with other countries in EMEA, such as the Netherlands, South Africa, the Kingdom of Saudi Arabia and the United Arab Emirates, where BlackBerry also holds #1 smartphone positions*.”