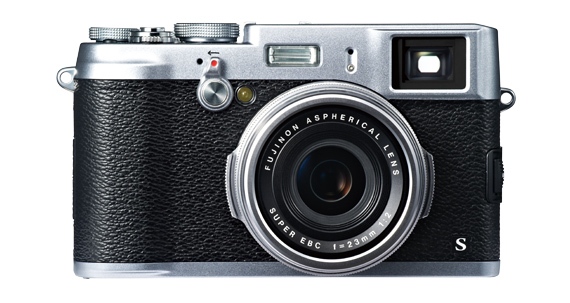 We’ve seen the first wave of smartphones, tablets and TVs, and now it’s the turn of the camera. Fujifilm is out to impress with a whole host of new snappers, but it’s their retro-styled compact and pro compact cameras that have first caught our eye.

The new X20 and X100S cameras pack some of the latest shooting tech into a body that’s got a much older feel to it.

The X20 is the smaller of the two, falling into the compact category. Similar to some previous models from the company, the style revolves around a black leather effect band running around the middle of the body, flanked by slick-looking silver finish top and bottom. This is a compact camera with a difference, and so while it doesn’t have removable interchangeable lenses, it packs in some very impressive and high-end features.

On top of the X20 you’ll find a hotshoe for flash guns and other accessories, a mode dial, control dial, pop-up flash and shutter button, all of which are finished in silver. On the front there’s an interesting addition that you’ll not find on many compact cameras: a dial to switch between manual, auto and auto-assisted focus. The lens is 28-112m f/2-2.8, with both an optical viewfinder and LCD screen on the back.

The X100S is a larger and overall more capable camera than the X20, and as camera enthusiasts will already know, it’s an upgrade to the X100 – that ‘S’ is all-important. A new X-Trans CMOS II sensor is said to provide a 30% improvement in low-light shooting over the original X100, which was already impressive.

Fuji has also overhauled the autofocus system, making it much snappier to lock on to a subject, although the 2.8-inch LCD display has been left the same as on the X100 from around two years ago. However, Fuji has upgraded to a much sharper 2.36-million dot resolution finder which should make manual focussing a doddle.

The X100S won’t be to everyone’s tastes, mostly due to its fixed 23mm (35mm equivalent) f2 lens, which can’t be changed. Think of this as a camera enthusiast’s camera – one for the collector or experimental photographer.

Design-wise the X100S takes cues from the X20, with the same black band through the centre, retro looks and stylish silver buttons and dials. You’ll get the same layout of hotshoe, mode dial, shutter and control dial on top of the camera, and the focus mode dial is located on the left edge of the camera as you’re holding it.