Home » Operating Systems » Android » Doctor Who 50th Anniversary: Prepare Your Gadgets For The Day of the Doctor!

Doctor Who 50th Anniversary: Prepare Your Gadgets For The Day of the Doctor! 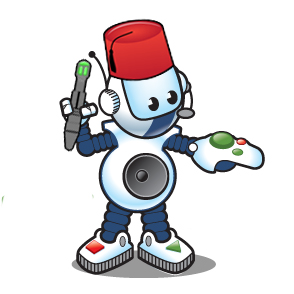 Whovians across all of time and space are preparing to celebrate a momentous milestone in the history of iconic BBC telly favourite Doctor Who this Saturday as the sci-fi series reaches its 50th Anniversary, and to mark the occasion a special 80 minute episode titled Day of the Doctor will air on BBC1 in 2D and 3D and also across cinemas in the UK in 3D.

The Doctor Who special will feature three Doctors including the tenth, played by David Tennant, the eleventh – current star Matt Smith, and the mysterious War Doctor – played by legendary John Hurt.

The gadgets of Doctor Who have always been stars in their own right, inspiring and mind-bending in equal measures from the time-travelling TARDIS to the trusty Sonic Screwdriver. So to help our readers best enjoy the festivities we’ve lined up a selection of the best Time Lord related apps and web based goodies available on your own devices!

Put yourself in the Opening Titles

The Official Doctor Who Facebook page is giving Whovians a dream opportunity to join the adventure on screen in their very own opening title sequence!

Simply visit the page on a home computer or laptop and accept the Doctor Who Facebook app to upload or use an existing photo and your name will be transported into the credits with your face appearing in the iconic opening fade alongside the spinning TARDIS, just like the legendary Doctors of the past half century! 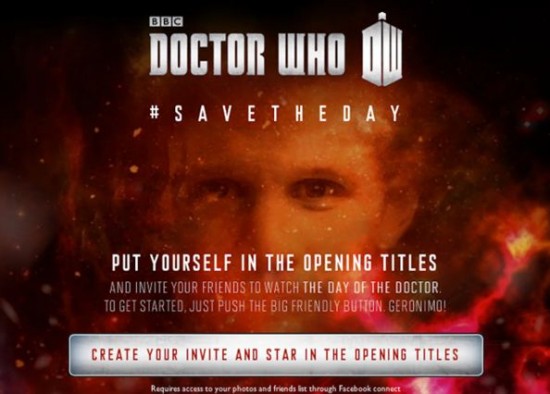 It’s really the stuff of fan-boy and fan-girl fantasy to appear in the opening sequence of Doctor Who which has featured the names and faces of many great actors including the likes of William Hartnell, Jon Pertwee and Tom Baker. Your video can also be shared with your social networking mates as a #SavetheDay invite to the biggest Doctor Who party ever!

Find the app and more about Doctor Who on Facebook.

You can now turn your smartphone into the Doctor’s Sonic Screwdriver in this app for Apple iPhone and iPod Touch!

The Sonic Screwdriver official app lets Whovians choose from one of four 3D renders of the galactic gadget from modern era Doctor Who, with a couple of the classics thrown in for veteran fans. 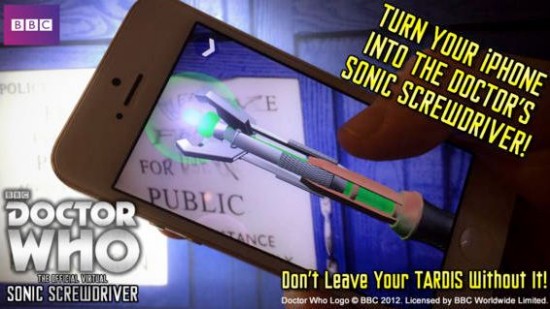 The transparent background setting lets you believe you’re actually handling the Sonic Screwdriver in real world situations through your smartphone’s camera and another mode allows you to explore space backgrounds, all complimented with tilt and movement interaction and authentic sounds as heard on the telly.

Other neat tricks offered by the Sonic Screwdriver app include turning your smartphone into a flash light and finding hidden doors and objects. It’ll also scare off any nasty aliens such as the Daleks and the Cybermen as well as warning you of any Vashta Nerada that might be unseen to the human eye!

Just like the real deal, this versatile virtual tool pretty much works on anything (but it doesn’t do wood), allowing wannabe Doctors to try the Sonic Screwdriver for themselves. It’s big fun for a small fee of £1.49 from the App Store.

Say What You See App – Android and iOS

There are still a few days to go before the Day of the Doctor hits screens and not being the Doctor himself we sadly lack the means to make it arrive any sooner! So how do we suggest you pass the time until the 50th Anniversary this Saturday? Well, we’ve found a great little official app called Say What You See which offers 150 Doctor Who themed picture puzzles promising hours of fun! 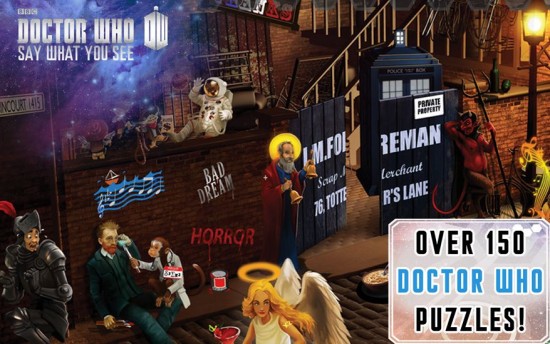 A myriad of objects and references ranging from gadgets to companions, aliens and episode titles from the Doctor Who universe are scattered around to be found in each scene – some easy to find and other requiring the keen eye of a well-travelled Whovian. However if you do get really stuck there are handy hints available to point you in the right direction because of course none of us has 900 years’ worth of knowledge like the Doctor!

Other features of the Say What You See app include a tour of the TARDIS interior and a visit to the Time Lord’s home world of Gallifrey. The app is universally friendly too and can be grabbed for both Android and Apple iOS devices for £1.99.

Google is well known for its ‘easter eggs’ and the world wide web tricksters did not disappoint when it came to the celebrating the Doctor’s anniversary year, hiding no less than the TARDIS itself in the Street View mode of Google Maps!

You’ll find the big blue Police Box parked up on Earl’s Court Road in London and with a click of a mouse you’ll be transported inside the TARDIS where you can explore the control room in full 360 degree panoramic view with immense close-up details of the buttons, switches and gadgets used to navigate time and space. 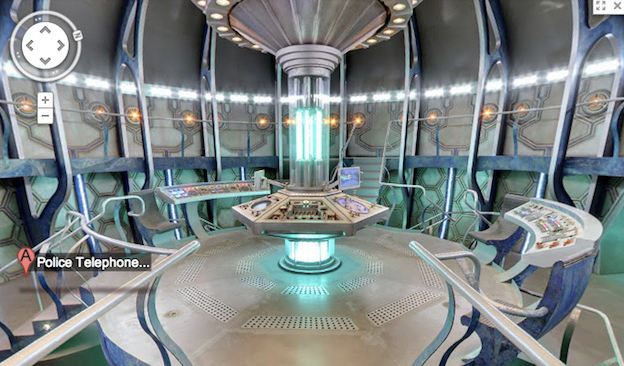 The stunning TARDIS interior is based on the current version of the telly Time Lord’s vessel as piloted by the Doctor, Matt Smith in the most recent adventures and will be featured again in The Day of the Doctor. Get a close up look at it before the Eleventh hangs up his fez in this year’s Doctor Who Christmas Special!

Night of the Doctor on BBC iPlayer

At the end of the climactic Doctor Who Season 7 finale fans were left with the mystery of a new previously unseen incarnation of the Doctor as played by John Hurt. No clues were given as to where or when this aged and troubled Doctor fit into the chronology of the time-traveller only that all will be revealed as we reach the 50th Anniversary episode The Day of the Doctor.

In prelude to the event the BBC has launched a ‘minisode’ titled The Night of the Doctor available to watch now through the iPlayer platform. 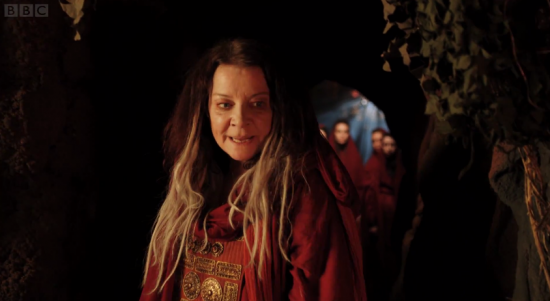 This is a 7 minute original short which acts as a teaser leading into this Saturday’s feature length episode and Whovians will get to finally find out how John Hurt’s Doctor comes into being and the early steps which take him far away from the path of the good-natured Doctors we’ve known in the past (or future, as it may be!)

The Night of the Doctor can be viewed on BBC iPlayer which is available through web browsers on home computer and laptops, also on most Smart TVs, tablets and mobile devices with the iPlayer app.

Classic and Modern Doctor Who on Netflix

If you’re a Whovian in need of refreshing your Doctor Who knowledge before D-Day, or you’re a new fan looking to catch up on the 50 year legacy of the sci-fi saga for the first time there’s no better place than Netflix.

The streaming website offers a selection of the best Doctor Who stories from the classic era from 1963 to 1989 complete with all those rubber monsters fans of certain ages will remember fondly, and may have hidden behind the sofa from!

These are joined by the first five seasons of the modern era Doctor Who from 2005 with episodes spanning the life and regenerations of Christopher Eccleston and David Tennant as well as Matt Smith as the Doctor up to 2010. 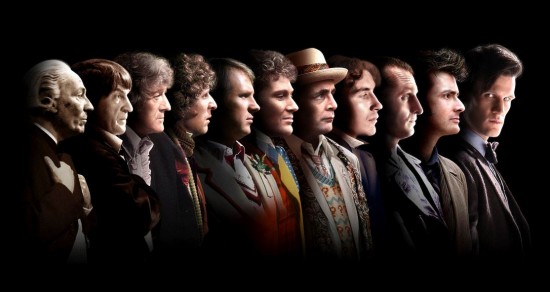 Also on offer is 1996’s Doctor Who: The Movie which we think fans might be eager to watch again after checking out the The Night of the Doctor (no spoilers!) and Tenth Doctor cartoon series The Infinite Quest is available to view alongside spin-offs Torchwood and The Sarah Jane Adventures if you want to take you viewing a bit further!

Netflix is available on home computers, laptops and many Smart TVs. Apps are also available for Android and Apple iOS. Subscriptions to the Netflix service cost £5.99 after 30 days free use.

So there it is, the Gadget Helpline’s guide to some of the exciting things you can do with your devices this week while you wait for the Doctor Who 50th Anniversary and The Day of the Doctor. Hold on tight Whovians, it’s almost time – GERONIMO!