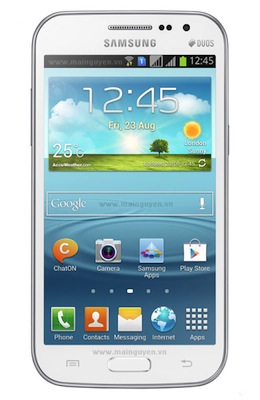 The handset has appeared on a Vietnamese retailer website and features a large 4.7-inch Super AMOLED touchscreen which runs off a quad-core 1.2GHz Snapdragon processor, and probably most importantly for the international market, the handset can take one or two SIM cards.

The Samsung Galaxy Win I8552 will also sport Android 4.1.2 Jelly Bean softwareand will have a 5-megapixel camera, with a front based  camera for video calls and a decent sized 2,000 mAh battery.

The fact that the Galaxy Win has dual SIM capabilities shows that it’s a handset built for developing territories such as Vietnam, India and certain parts of China, with these areas being particularly big on their dual SIM phones.

Additionally, dual SIM is popular for people who travel a lot and require different SIM cards for other countries to try and keep the budget down.

With specs like this though the Samsung Galaxy Win packs a decent punch and is definitely modelled in the vein of the Galaxy S3 and S4 smartphones.

Samsung really does seem to be beefing out its low end and mid-range smartphone in recent months, with other handsets like the Samsung Galaxy Pocket Neo, Galaxy Star, Galaxy Fame and Galaxy Young all unveiled recently.