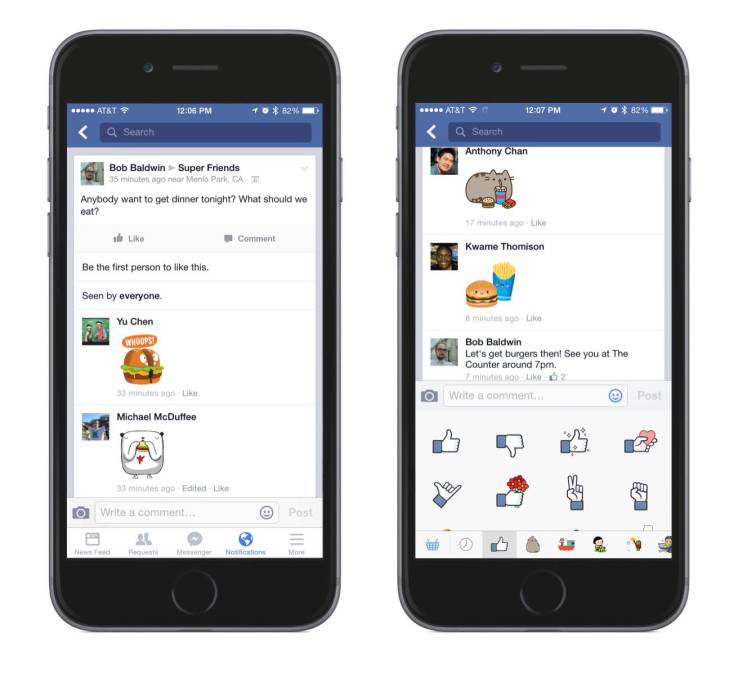 Facebook have introduced stickers to comments, group posts and Event posts. Previously only available through Facebook Messenger, the emoji –like cartoons were often used to add a little excitement to a conversation but now have been introduced elsewhere on the social network from today.

The project engineer Bob Baldwin announced the news on his own timeline saying “stickers will allow people to reply to a variety of posts in a more fun way than words alone. You can now easily show your excitement for a post with good news, cheer up a friend who’s feeling down, and express a variety of more nuanced reactions,”

Also See: WhatsApp Could Get VoIP (Voice over IP) in Future Update

Facebook stickers can be used by tapping on the smiley face icon in the bottom right corner of the comments box. You’ll then get a list of stickers to choose from, ranging between a magic cat to a bird with a lampshade on its head. They do say and image speaks a thousand words!

Although the use of Facebook stickers may seem somewhat pointless and childish, they could potentially be used to diffuse misinterpreted conversations or comments. By using a sticker it can help accentuate a point or mood about the writer, helping the reader to understand what is meant. For example, if someone were to comment something meaning it as a joke, without a sticker it could be interpreted as malicious. The use of a sticker could help the reader understand it was meant as a joke.

As Facebook shifts to become primarily mobile phone based, it’s no wonder the company is ever-changing towards quicker ways of communicating, firstly with the separation of messenger to an entirely new app and now with the use of stickers to sum up those ‘meh’ moments with one picture.

Here’s an example just for fun: