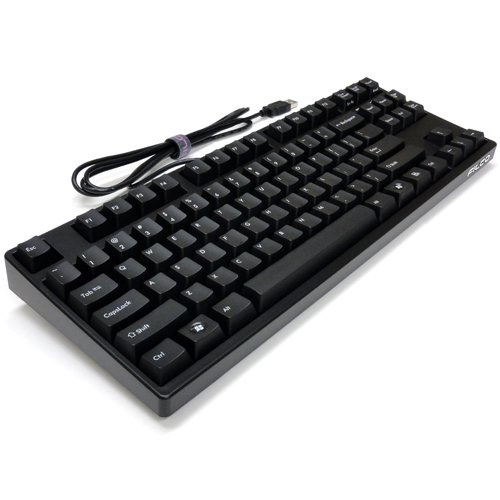 As a desktop keyboard goes, the Filco Majestouch-2 NKR 104 exhibits some very serious features bearing in mind the compact nature of its design. The gamer-friendly compact version (without a numeric keypad) of the NKR we tested saved a lot of desk-top space and was as easy to use as the familiar full size model, which is also available from The Keyboard Company.

In terms of typing speed, the NKR rivals the speed of keyboards usually found on laptops. The key action is very smooth and fast which results in quicker keystrokes and faster reaction times in video games. Indeed, manoeuvring the player in faster-paced games such as Borderlands, The Orange Box and Fallout: New Vegas was a lot more instantaneous, sometimes bordering on jarring. The NKR also is great in more tactical games such as Diablo 2 and World of Warcraft, where fast keystrokes mean multiple decisions are quicker by a hopefully crucial fraction of a second.

Additionally in terms of just typing the NKR manages faster speeds too. The keystrokes make a pretty loud clicking noise as you type, but on the other hand it does sound like those old keyboards from TV. Filco keyboards all have the proper mechanical switches: there is a choice of three types.

The keyboard itself is a rugged beast, with almost armour like casing around the main body. This is slightly heavy at times but in the long run is going to probably come in useful if the keyboard is used to travel with, which is possible if you can stand the bit of extra hand luggage due to its small size. The manufacture is overall robust and rigid, with no problems relating to bending and breaking.

An interesting feature of the NKR is that the keyboard has is its ability to allow the user to input a large number of keys simultaneously without the keyboard overloading and causing the beeping sound that happens when you press a few more than 5 keys. This allows you to input complex stuff in games or other applications where the keyboard is heavily used, such as a virtual musical keyboard, or drum machine.

The keyboard comes with useful red keys to highlight the WASD secondary arrow key area and the escape key, complete with a key remover, which is admittedly handy. Also you get a converter to allow the NKR’s USB cable to be converted to an older PS-2 input, which frees up a USB port on older model PCs for other more modern USB dependant devices.

Overall, a pretty solid feat of engineering for Filco, and a good buy for gamers and typists alike, although the gamers would possibly prefer the version with the complete numeric pad included to make more shortcut keys available.

Further and full details available from The Keyboard Company at  www.keyboardco.com