If you’re an Android user and like getting to grips with the latest apps first, Google has started adding a handy feature for you on its Play Store listings that will allow you to pre-register for future software releases and receive a notification of when your next favourite downloadable becomes available on your device.

Despite no official word from Google themselves the Pre-Register option was spotted by several eagle-eyed sources, attached to a yet-to-be released third-person shooter game based on the next Terminator movie. You can check it out for yourself if you search for Terminator Genisys: Revolution via the Google Play Store on either your Android gadget or on the Play Store website through a desktop web browser. 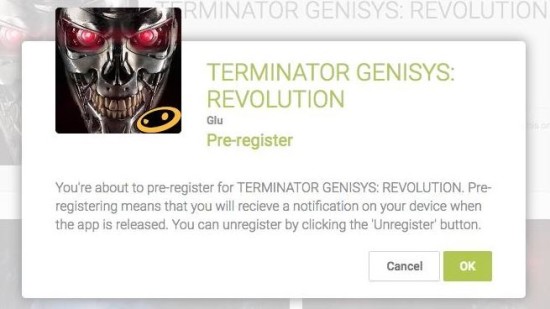 You won’t see an option to buy or install the app right now but in its place you will see the pre-register button. One minus point is that there’s no indication of price or whether the app will be free.

None of the other apps in the Google Play Store’s vast catalogue seem to have this option included with them just yet or it may be they just haven’t been found yet as Google has kept this one very quiet indeed. There’s no mention of the note-worthy new feature on the company blog or the Play Store front page, where we might soon expect a Pre-register apps to appear in their own category.

We think it’s a neat addition not only for the app user, who gets to read up on releases and the “ones to watch” but also for the developers such as Glu Mobile – the makers of the Terminator game, who can advertise on the Play Store, providing some details and generating interest for their apps ahead of their launch on Android. Importantly for Google, pre-registering for apps is not something currently offered by the App Store.