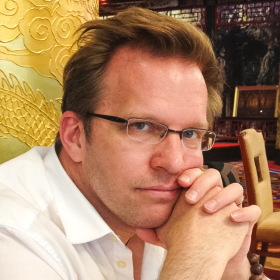 You may or may not have heard about Kevin Geiger recently, in fact, you may not be aware of him until now but he is the man to speak to when it comes to VR and Virtual Reality applications…

Kevin Geiger has over 25 years experience in the arts & entertainment, including 15 years with Disney in Burbank and Beijing.  Resident in China since 2008, Kevin has enjoyed an eclectic career as artist, animator, technician, teacher, consultant, entrepreneur, producer and executive.  Among his accomplishments, Kevin is a Disney feature animation veteran, was an animation instructor at Cal Arts, is the first foreign Guest Professor at the Beijing Film Academy’s Animation School, received the 2011 Beijing Great Wall Friendship Award, co-founded Magic Dumpling Entertainment in Beijing, and was VP & Head of Creative for Disney’s Greater China Local Content team.  In 2015, Kevin left Disney to resume his independent ventures in China.  He is currently a founding Partner of Magic Dumpling Entertainment, Distinguished Professor & Acting Vice Dean of the Beijing Film Academy’s new Digital Media School, and Executive Director of the Beijing Film Academy’s International Animation & Virtual Reality Research Center.

Kevin graciously accepted to answer some questions for us with regards to Virtual reality and Augmented reality as we move into 2017, so without further ado:

Some claim that the VR industry in China has begun to slow down drastically especially where hardware is considered. Do you believe this to be true?

Slow down’ is a relative term. China’s VR industry is still racing ahead on the hardware front, in terms of intensity if not innovation. There has indeed been a cooling of investor ardor from the frenzied days of late 2015 and early 2016, but this is a good thing in my opinion. It has weeded out many unrealistic investors, and increased the percentage of those who are in it for the long haul. This separation of wheat from chaff applies to China’s entire VR ecosystem, which continues to grow rapidly.

HTC’s Alvin Graylin predicts that somebody will spend at least 30 days within VR non-stop this year. Do you believe the tech is ready for this yet?

Well, one can only hope that they’re in an untethered HMD, or that’s going to be a messy 30 days. David Blaine once spent 44 days suspended in a plexiglas box above the River Thames, so I suppose someone can spend 30 days in VR right now as a stunt or experiment. (Thorsten Wiedemann wore an HTC Vive for 48 hours straight in January 2016, and artist Mark Farid has been planning a project called “Seeing I” that will have him in VR for 28 days.) The real question is whether there is any reason for the average person to spend more than 30 minutes in VR. Currently, the answer is “no”. The hardware needs to be much more comfortable and the software needs to be much more compelling: to the point where you don’t think of being “in VR” any more than you think of being “in your eyeglasses”. Alvin’s a friend, so I would encourage him to do the “30-day VR challenge” himself this year. The experience should prove transformative.

Personally, I prefer AR. There is not much discourse about this yet though. Can you see AR being taken up by the mainstream in a big way this year and if so which implementation is most likely (retail, arts, business etc)?

To date, augmented reality has been the red-haired stepchild of VR, but there has been an increasing amount of awareness and interest in AR over the past year. People seem to recognize AR as something that can aid them in their daily lives (as the term “augmented reality” would imply), whereas VR is regarded as something more escapist. I think that AR will explode across the e-commerce, education, healthcare and entertainment sectors within the next three years. Consumers are already using AR to choose furniture for their living rooms, and AR books are reinvigorating the publishing industry. Down the road, we’ll employ mixed reality technology in lightweight headsets with form factors similar to our eyeglasses, alternating between augmented reality and virtual reality according to the context of the moment.

What would you like to see realised in VR and why?

I’d like to see a piece of “must have” AR/VR software or content emerge that motivates my septuagenarian parents to purchase a high-end headset. At that point, I’ll know that the technology has truly arrived. My folks aren’t Luddites, but they’re also not early adopters. VR must expand its horizons beyond the gaming industry in order to achieve real traction with consumers.

Daydream has just been released, Pixel is obviously ready for this and HTC will probably follow; OLED is low-latency which is a required quality to do VR. To this end, with mobile VR, Google will probably be a large driving force. Do you believe mobile VR will be the proverbial key to unlocking mainstream inclusion of VR?

Absolutely. Tethered VR is a constraint that undermines immersion and application. Mobile VR is the future. “Room scale” VR is nothing to brag about. “World scale” VR is the only game worth playing.

VR is being adopted in themeparks, cafes, malls, retails parks across China. Do you believe VR will be adopted in such a way across the Western world this year?

While I believe that VR entertainment zones will grow increasingly prevalent in the Western world, China will still rule the roost on this front. Mainland China currently has more than 3,000 VR experience zones, and China’s 150,000+ internet cafes are quickly evolving into VR cafes. These big numbers are not only driven by China’s massive population, but also by societal considerations: Chinese people not only have less space for home systems, but the gaming culture (though pervasive) is essentially frowned upon. Hence the prevalence (and attraction) of non-home-based Chinese gaming havens versus the Western world’s comfy home entertainment culture.”

What is the largest restriction of fast development for VR device progression?

Lack of vision and lack of nerve.

What excites you most for the year ahead in VR/AR?

2017 will be the year that VR & AR “get real”. The hyped technology and obfuscated numbers will give way to actual results. Smoke & mirrors will dissipate, plans will be revised, new players will get off the fence, and the VR ecosystem will take a big step forward.

Do you see VR growing evenly across both consumer and commercial ventures or could one possibly dwarf the other?

I think they’ll go hand-in-hand. For example, if AR/VR-based e-commerce takes off, this will result in a symbiotic transformation of both the consumer and commercial sectors.

Do you see prices dropping drastically as manufacturers begin to compete and innovate cheaper improved products or are the costs high due to the resources needed to produce the headsets?

The cost reductions of VR hardware production – and the associated price reductions for consumers – will most likely adhere to Moore’s Law, which though slowing should still apply for the next ten years or so. High-end VR hardware manufacturers need to bring their prices down dramatically if they hope to achieve true mass market traction.

What are you working on right now or will be in the near future?

I’m currently Executive Director of the Beijing Film Academy’s International Animation & Virtual Reality Research Center. The iAVRrc was founded in late 2015 to advance the art of animated and cinematic storytelling in feature film and new media, including virtual reality and augmented reality, and we have various projects underway. I’m also developing animated features and immersive content as a partner in Magic Dumpling Entertainment, based in Beijing.

Where do you see VR/AR in 5 years from now?

Five years from now, VR/AR will be where the iPhone was in 2012 (relative to its introduction in 2007). VR/AR technology will have matured, and the applications will have evolved to the point where significant market presence has been achieved. However, the road to ubiquity will be bloody. I’ve said that the VR industry’s next five years will be a dogpile of activity, in which 90% of the dogs will die.

We thoroughly enjoyed reading your life story on wordpress, what do you think the next chapter will contain? More China or perhaps somewhere else?

I generally take things year by year, but see myself in China for a while longer – unless something surfaces that makes sense to run to (or run from). I have some plates here that I hope to keep spinning, but if I’ve learned anything in my eight years in China, it’s to stay flexible.

Our thanks once again to Kevin for this interview from all at gadgethelpline. We are definitely looking forward to seeing more plates spinning from his direction in the near future!