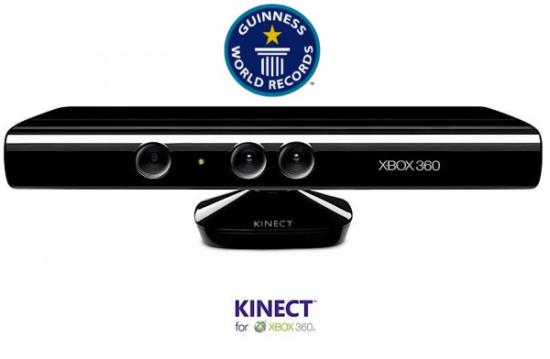 Microsoft’s Kinect for Xbox 360 accessory was flying off the shelves back when it was first released on November 4th 2011, with one million units being sold in the first 10 days.

Kinect’s success didn’t stop there though, with sales figures tracked at 2.5 million units sold after the first 25 days, then 8 million sold by January 2nd 2011. It was one of the most wanted items at Christmas last year, with families taking the new motion-sensing gaming technology into their homes and hearts.

Sales have continued to grow into 2011, so much so in fact that Kinect has caught the eye of the Guinness World Records. The record books have confirmed that Microsoft’s Kinect for Xbox 360 is the fastest selling consumer electronics device of all time, with 10 million devices and 10 million Kinect games sold to date. This achievement confirms that Kinect has sold more units during an initial sales period than both the iPhone and the iPad from Apple.

Gaz Deaves, Editor of Guinness World Records 2011 Gamer’s Edition, said: “The sales figures here speak for themselves.  We can confirm that no other consumer electronics device sold faster within a 60-day time span, an incredible achievement considering the strength of the sector.”

Are you one of the millions who has already purchased Kinect for your Xbox 360? Do you love it? Let us know by leaving a comment.