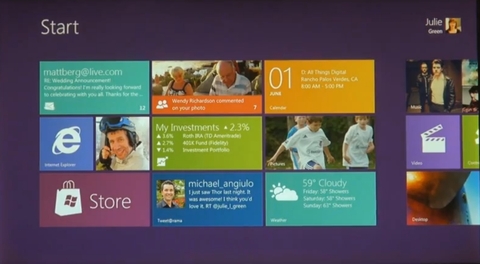 Microsoft is expected to unveil the new Windows 8 operating system as a full beta version (yes, again!). This is thought to be later today at the Build Conference in California, following a lengthy period of speculation that the anticipated refresh of the popular desktop OS will be arriving at the event and presumably on tablet.

Back in January at the CES conference, Microsoft announced that its new Window – the 8th edition – would add support for ARM microprocessors in addition to traditional CPUs from Intel and AMD, and would become the first version of operating software which would be translated for the growing trend of tablet computers. Korean tech co. Samsung are set to become the first manufacturer to provide a tablet-based host for Windows 8.

Several pre-beta builds have escaped online since the early stages of Windows 8, in September through to April and May.  These versions were appearing on torrent sharing sites such as The Pirate Bay and BetaArchive, some copies even surfacing on eBay, with features like the new ‘Welcome’ screen, AppX software – based on the Silverlight application framework, an immersive version of Internet Explorer which closely resembled the mobile version as well as automatic adjustment of windows frames colour to suit the desktop wallpaper.

The early leaked builds also presented users with a portable workspace allowing for Windows 8 installation on USB storage devices, and also the ‘advanced hibernation functionality’ which we recently saw demonstrated in the official ‘boots in 8 seconds‘ video from Microsoft.

To the delight of gamers, it’s also been suggested that Windows 8 will bring Xbox 360 CD support to desktop personal computers.

Despite leaks generating exciting for the next-gen Windows software Microsoft in July reaffirmed the fact that Windows 7 was to continue to receive a push, acting as the step-up to Windows 8, with CEO Steve Ballmer stating “”It appears there was a misstatement. We are eagerly awaiting the next generation of Windows 7 hardware that will be available in the coming fiscal year. To date, we have yet to formally announce any timing or naming for the next version of Windows.”

Touting some when in early 2012 as a release of the full public release of Windows 8, Microsoft are yet to reveal how many of our familiar packages will function within the new OS, and it’s speculated that we’ll see how some of our Office software such as Word and Excel will be presented in the announcements to come today at around 5pm UK (GMT).