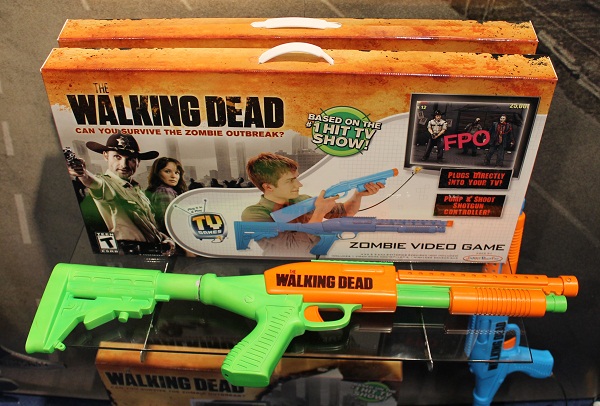 The New York Toy Fair is well under way with a whole host of licenced movie and TV cash-ins making parents everywhere nervously anticipate the new wave of summer blockbuster fads, must-own action figures, gadgets and games set to empty wallets with a relentless fury. If, on the other hand, you have no kids and are like us a big kid yourself – the Toy Fair is a treasure trove! Between our “serious” news the Gadget Helpline will be dipping in and out of the comings and goings in NYC to bring you a few of the best gadget-based toys coming out of the event this week. Starting with this simplistic TV game based on one of our favourite shows – The Walking Dead! 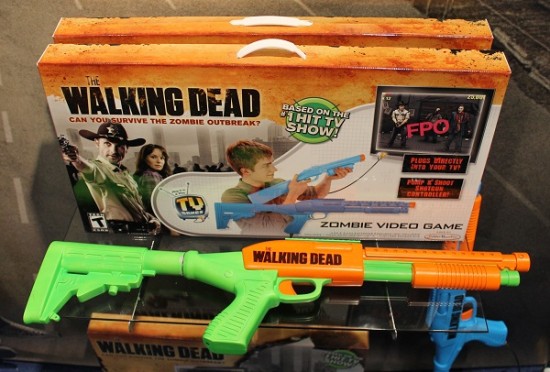 Jakks Pacific is the company behind The Walking Dead Deluxe TV Video Game – a casual play, simple to use, console-less and self-contained shoot ‘em up which comes complete with colourful child-enticing pump-action shotgun to blast your way through the legions of the undead. The gun shaped controller simple pops into your telly’s A/V port and carries a number of games pre-loaded featuring video scenarios of zombie-ravaged cityscapes and settings familiar with fans of the hit programme, putting the player in the position of Sheriff Rick or the shady Shane.

Part of Jakk’s “Plug It In & Play TV Games” – this one let’s you do just that. The beauty of this game is that you don’t need to be an Xbox pro to work this out, just a keen sight and a sharp aim to pop those Walkers right between the eyes! The Walking Dead Deluxe TV Video Game is suitable for teens and will cost $40 when released in the United States later this year.