PS4 System Software Update 1.7 – How to Install the Latest Firmware

System Software updates are vital for maintaining the continued enjoyment of our games consoles and as Sony launches its latest series of tweaks and improvements for PlayStation 4, with system software version 1.7, we thought it a good time to run through how to check your firmware version and how to ensure you update is a success!

We’ll presume you’re already connected online with your console, if not this might be a good time to check your wireless settings and get yourself online before we begin!

First we’ll check your system software version, to do this you will need to enter the Function screen and select Settings – System – System Information. The firmware version should be visible in this section and we’re looking for it to say 1.7, if it’s still on 1.62 or below we need to get you up to date.

The PS4 will usually search for and download system software updates automatically, but you may still need to install them. You must go to Settings once again and then System Software Update. When notified on screen of the file’s successful download follow the on-screen instructions to install it. It’s pretty straight forward from here on. 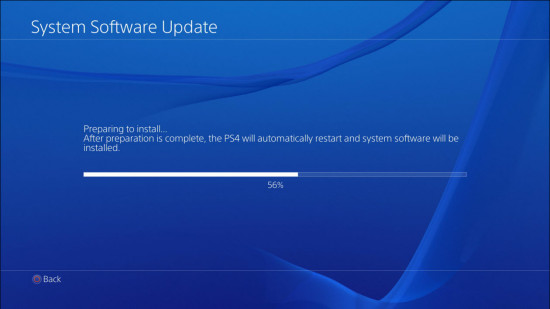 If you’re in a circumstance that means you aren’t hooked up to the web with your PS4 or are still left waiting for your update to download, it is possible to obtain the file with an internet connected computer and a USB storage device. This procedure is a little bit trickier, but here’s the gist:

Using your computer you’ll need to format yourself a USB memory device which will hold at least 400MB of data, when this is done create a folder on your desktop named PS4 and within this folder another folder called UPDATE.

Hop over to the official PS4 support site and the System Software section (Here) where you’ll be directed to a download link to the firmware file for specific versions of Windows. Select your version and save the file (usually named something really recognisable, like PS4UPDATE) to your newly created UPDATE folder. When it’s on, safely remove your USB device from the computer.

Ensure the PS4 is powered down, but still plugged in, then connect the USB device into the port in the PS4. Pressing and holding the power button on the console for a count of around 7 seconds should bring on the blue light, which is followed by the white light and during this you should hear two beeps. When you see that white light, let go on the button.

You’ll then be prompted to connect the Dual Shock 4 controller with the USB connection cable. Pressing the PS button at this point will bring you into SAFE MODE (which may be somewhat familiar to PS3 users). 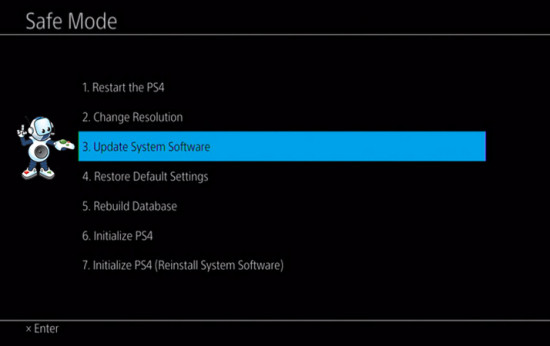 A number of options are available in SAFE MODE and the one we need is option 3 which is named Update System Software – this will allow just a firmware update.

(If you feel you want to completely reset your console to its factory defaults at any point you may wish to use option 7 Initialise PS4 (Reinstall System Software). This will restore everything including all user data and settings – So use with caution and only if you believe your console has a serious software issue.)

Follow steps on screen to complete the install, the console will reboot when complete and your PS4 will be up to date and ready to use all the great new video improvements and new settings available in system software version 1.7. The Gadget Helpline has a rundown of some of these features and you can read about them now!