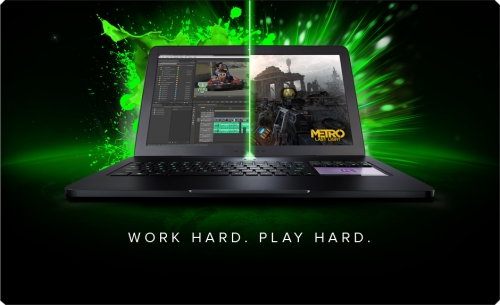 In the wake of graphics behemoth NVIDIA launching its new mobile GPU the GTX 800M series, Razer has decided to cram the top spec GTX 870M inside an updated version of its thin Razer Blade gaming notebook.

While the new NVIDIA GTX 870M GPU is certainly a key feature of the machine, its most appealing feature is probably the very high-resolution display. Razer is fitting the Blade gaming notebook with what it claims to be the world’s highest resolution 14-inch display, which is also touch capable.

That 14-inch screen supports a native resolution of 3,200 x 1,800; that’s a record 5.76 megapixels, sharply exhibiting even the finest details and text with 262 pixels per inch. The screen uses IGZO/IPS (Indium Gallium Zinc Oxide/In-Plane Switching) technology which promises a 250% increase in contrast ratio compared to the screen used in the original Blade notebook, and high brightness LED backlighting optimised for outdoor use, wide viewing angles, and dramatically improved video propagation and response. All in all, an unusually impressive resolution that should make the games that it can run look fantastic and a screen that should make playing in bright light much easier than before – not that computer gamers like bright light, of course.

The screen also supports 10-point capacitive multi-touch  for Windows 8, the operating system of choice. Along with the high resolution screen and the new GTX 870M GPU, the new Blade also gets 4th generation Intel Core i7 processors and a gaming grade keyboard. Storage options include 128GB, 256GB, or 512GB SSDs and the laptop has 8GB of DDR3L RAM.

“The Razer Blade sets the benchmark by which all laptops should be measured,” says Min-Liang Tan, Razer co-founder, CEO and creative director. “The Razer Blade, the world’s thinnest and most powerful gaming laptop, now comes with the best 14-inch notebook display on the planet.”

“The Razer Blade laptop screams premium design and top-notch performance, and we are as happy as can be outfitting such a beautiful and powerful machine with our latest graphics processor,” says Brian Choi, NVIDIA Sr. Product Manager. “With nearly twice the graphics horsepower compared to last year’s model, the Razer Blade will be one of the most visually stunning, yet portable, gaming laptops the world has ever seen.”

The machine starts at $2,199 and can be pre-ordered right now with shipping starting in early April.  Pre-orders are being taken over at Razer’s website.