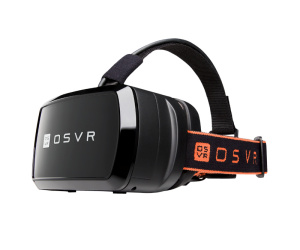 Last year Razer, a company which are best known for their high end laptops, keyboards and mice, celebrated following reports of brilliant performance and increased profits. Now the company is moving on to better things, with the recent announcement of the Razer Open Source VR project.

CES saw the revealing of Razer’s VR headset, as well as a complete supporting software suite for the device, with Razer higher-ups embracing the importance of VR as one of the new frontiers in gaming, Razer’s primary and most successful sector.

‘Gaming is moving towards the virtual reality platform and this poses huge benefits and challenges to gamers at every level,‘

OSVR brings game developers, gamers and hardware manufacturers together to solve those challenges and make virtual reality gaming a reality for the masses.‘

But how can a headset be open source? Well, for starters, design schematics for the headset be available to ‘print off’ using a 3D printer, if you have one of those just lying around the office. Once you’ve dug out your 3D printer and accomplished the impressive feat of getting your headset running to design specifications, software is also free to use.

In fact, Razer’s software allows developers to create apps for Windows, Linux and Android on an open platform. Technically, with the crazy resources and know how required, one might be able to build their own headset, create a game and enjoy. Again, you need a lot of stuff to do this yourself, but someone will inevitably be able to accomplish this. Challenge issued.

OSVR seems a little basic compared to the massively funded Oculus Rift, but the device is already one of the most universal and open.

The project isn’t quite ready as of yet, but faith in the project is high, with some big names backing Razer’s attempt to standardize the tumultuous world of virtual reality products. LeapMotion, Virtuix, Bosch, Sensics, GameFace, Gearbox, Techland, the International Game Developers Association (IGDA) and the Open Gaming Alliance (OGA) are all on board, so OSVR is already endorsed by game promoters and developers alike.

‘The OGA is committed to an open ecosystem for the gaming industry, and is pleased to support the efforts of the OSVR,‘

The hardware for OSVR is set to release this June, but the software is almost ready to go, with the open platform for building applications has been made available already to a limited number of developers, with out of the box support for Unreal Engine 4 and the Unity Engine included. It’ll be interesting to see what those developers manage to come up with before June.