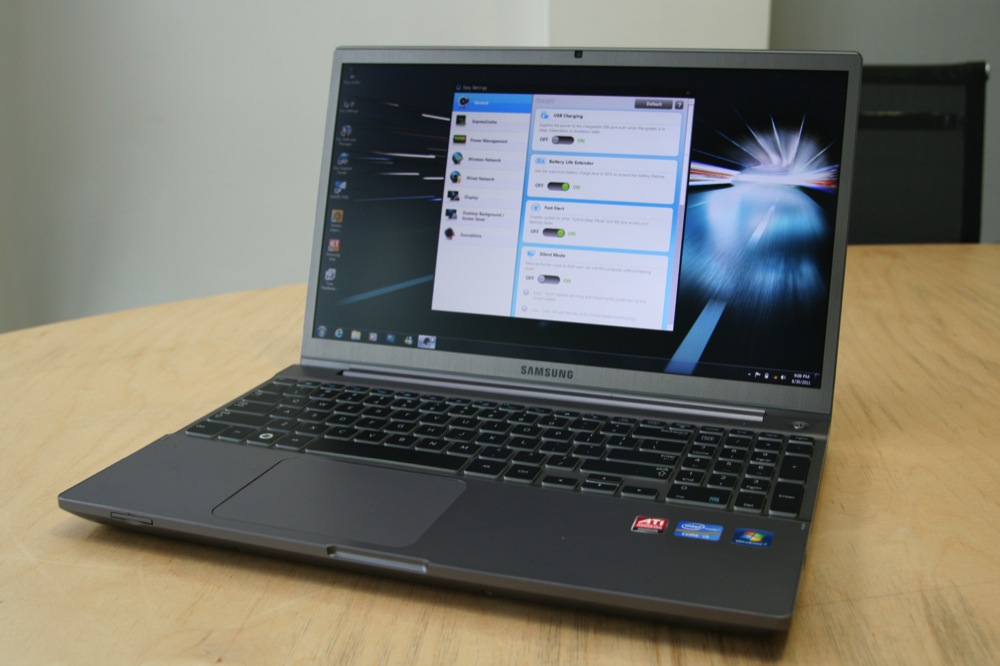 Samsung has launched a new generation of Windows 7 laptops which are aimed to take on the might of the Macbook Pro from Apple.

The new Series 7 laptops are described as ‘premium’ and join another Series 7 laptop which is already available, the Series 7 Gamer. The new models go by the model 700Z and feature top-notch specifications, classy design and a surprisingly good price tag.

There are 14 and 15.6-inch models of the 700Z available, the latter of which will definitely be sold in the UK. Despite a larger 15.6-inch screen, the larger of the two models still feels much smaller thanks to the stylish slim casing and thin bezel that surrounds the screen itself.

That 15.6-inch screen is a 300-nit display with a decent resolution of 1600 x 900. The screen is rounded off with a matte finish to give an anti-glare effect, perfect for very bright conditions or for those who use their laptop on the go.

On the left side of the 700Z you’ll find two USB 3.0 ports, Gigabit Ethernet, HDMI and VGA sockets and on the right side there is a single USB 2.0 socket and slot-loading DVD drive. Much like Samsung’s wafer-thin Series 9 laptops, the VGA port on this model will also require an additional dongle adaptor to work.

You can spec up a 700Z notebook to suit your needs, though the entry-level model still features a decent specification including an Intel Core i5 processor and 6GB of RAM, for the fair price of £799.

Upgrades can be made on the processor, graphics card and hard drive, all at a cost of course. You can opt for a much faster Intel Core i7 processor clocked at 2.2GHz, RAM can be topped up to 8GB and an AMD Radeon HD 6750M graphics card can be added for that extra visual oomph. If you opt for a higher spec model, you’ll also have the option to add 8GB of flash memory onto your laptop’s motherboard, dropping the boot time down to a mere few seconds thanks to Samsungs FastStart Technology.

The 700Z series laptops are finished in a very good looking brushed aluminium and feature a black chicklet keyboard, a la macbook. The keyboard also features a separate number pad, a nice addition and something you don’t often see on high end laptops.

Beneath the chicklet keyboard is a large glass trackpad which supports multitouch navigation such as two-finger scrolling gestures. We’ve heard good things about the trackpad already; with some even saying it’s as good as the trackpad on the Macbook Pro!

Last but not least, Samsung have opted for an 80Wh Lithium Polymer battery which they say will maintain 80 percent of its original capacity for up to 1,500 charges.

The 15.6 inch Samsung 700Z will be available in the UK within the next month, starting at £799 for the base model and prices rising accordingly with specification upgrades.