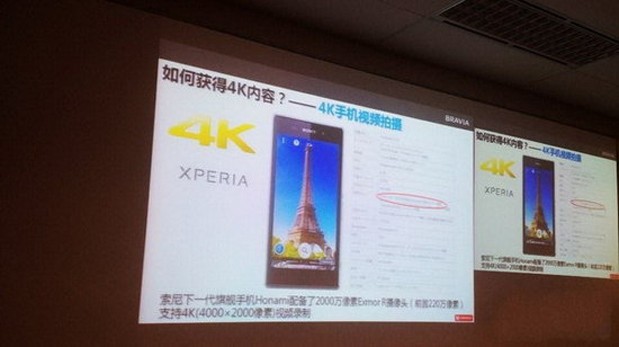 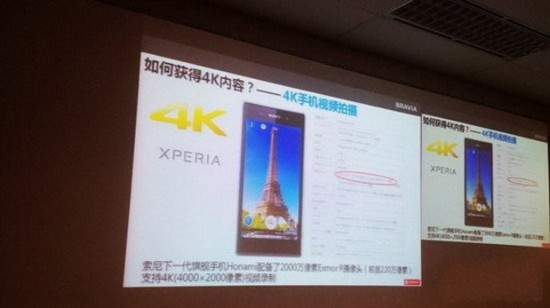 The Sony Xperia i1 is pretty much the worst kept secret in the history of smartphones with numerous leaked images, specifications and details surrounding the “Honami” codenamed device and now a new piece of previously unknown information has reportedly been leaked: the Xperia i1 may record 4K Video!

Admittedly the information comes from an unknown, un-sourced leaked image which has come up on the Chinese social networking site Weibo, which has since been deleted. But in the time it was up the information has been copied and loosely translated and its appears that the forthcoming flagship phone will be able to capture 4K videos on the massive 20MP camera.

“How do you get 4K content? By shooting videos with a 4K cellphone.”

We already know that the 20-megapixel camera will have an Exmor R rear sensor on the Honami, and we have been informed that the device will also have a 2.2-megapixel front-facing camera too.

How this 4K technology will work we have no idea as a pixel density of 4000 x 2000 is the range needed to show off 4K images and videos and its unlikely that the Honami will sport such a display. However that doesn’t mean the handset wont do it and then have Bravia features that sends the newly captured 4K footage to a Sony Bravia 4K TV!

Inside the i1 Honami we also expect A screen that is a 5-inch 1080p display with a Snapdragon 800 quad-core chip whirring away. The phone will also come with 2GB of RAM, 16GB of storage – which can be added to with a microSD card – plus a second front 2MP facing cam. It’ll have a big 3,000mAh battery to support the large screen and camera plus 4G LTE and NFC connectivity.

We are also expecting Sony to reveal the Xperia i1 Honami in early September at a special press event at the IFA in Berlin.