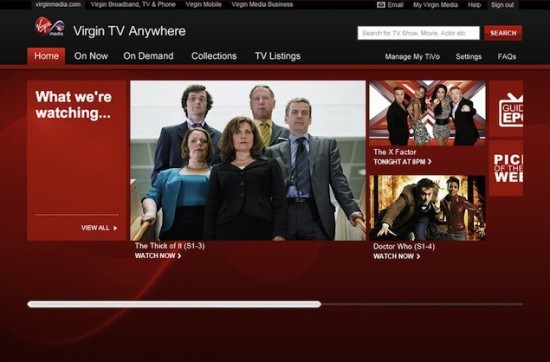 When Virgin TV Anywhere stepped on to the scene in September of last year we were very impressed; An app which supplied Live TV viewing on demand, the ability to set your TiVo box to record a program from anywhere in the world and even remote control functionality for the latest set top box all made for a compelling download for Virgin Media TiVo customers, but only those with an iPhone or iPad.

An Android app was promised to be coming soon and now, 14 months later the company has finally brought its app to Android and the Google Play Store, again as a free download. Furthermore, the app arrives on Android just as Virgin has added 9 new TV channels for viewing on the move, taking the tally to an impressive 67. That’s right: the ability to watch 67 live TV channels on your mobile. In case you’re now wondering, the 9 new channels are Alibi, Dave, Drama, Good Food, Home, Really, Watch, Yesterday and CBS Reality.

Virgin’s biggest rival Sky has been on Android with its Sky Go app for quite some time now, offering catch-up TV and Live streaming, so Virgin is somewhat late to the party. It wants to make up for its tardiness by making sure that its customers know there are more channels on TV Anywhere than Sky Go, including BT Sport, ITV and Channel 5 – three big names which are sure to be key to the app’s attraction.

If you’re a Virgin Media customer with a TiVo box then you can download the app, log in with your Virgin Media account and get it paired up to your TiVo box. Once that’s done, provided you have a Wi-Fi or cellular data connection, you can set programs to record and manage your library of recordings using an Android phone or tablet from anywhere in the world.

Finally, the bad news. As with Sky Go, unfortunately the app won’t work with every single Android device out there. The list of compatible devices is impressive for launch though, with 23 smartphones and 8 tablets down to play nicely with the app. Some of the phones unfortunately won’t cope with the live streaming aspect, but will do TiVo box management on the go, such as the Samsung Galaxy Ace and Ace 2, Sony Xperia L and Xperia U and the HTC Desire X. As you might expect, if you have one of Samsung’s newer phones from the Note and Galaxy S range, HTC’s One range or Sony’s Xperia range, you’ll get access to full functionality. All 8 of the compatible tablets will also do live TV streaming as well.

Virgin TV Anywhere is now available to download from the Play Store and you can check which devices are compatible here.