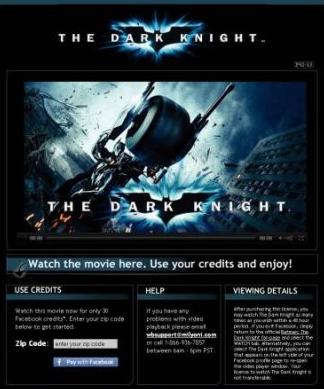 Warner Bros. is offering to make the most of those Facebook “credits” when they begin trials for a movie player experience through the leading social networking site and the respective pages of some of their popular films, starting in the US with “The Dark Knight” which will become available today and more to follow in coming months.

Simply going to “The Dark Knight” official Warner Bros page on Facebook, clicking “Like” and forking out the 30 credits ($3 worth) will allow access to a VOD player with 48-hour permission to view the movie.  Pausing and playback will be available, so you can log off from Facebook but resume from where you left off at any time. Watch as much as you like within the 48-hour time period – if you’re not easily distracted by notifications and gossip between your mates!

I have to confess that I’m not a user, or overly-familiar with the Facebook credits thing, but from what I gather these can be obtained by addicts of Mafia Wars, Farmville and games of that variety (you know, the ones that constantly bring up annoying notifications that so-and-so has lost a sheep and needs your help!). The credits are usually exchanged for further rubbish for your farm or city and are sometimes awarded free for loyalty to certain games, but can also be purchased for money, via credit card.

Warner Bros, kicking off with one of their most popular movies of the last few years, are providing a more worthy use of those Facebook credits and as a film fanatic, if I had the credits to spare I would probably use them for this, as a one-off. But are social networkers actually expected to pay up for a Facebook service when the superior alternative Netflix in the US and Lovefilm in the UK are available?

Being able to comment on the film and share opinions with others is appealing, and the price seems reasonable but personally I’m not sold. Also no word on the quality of the playback…