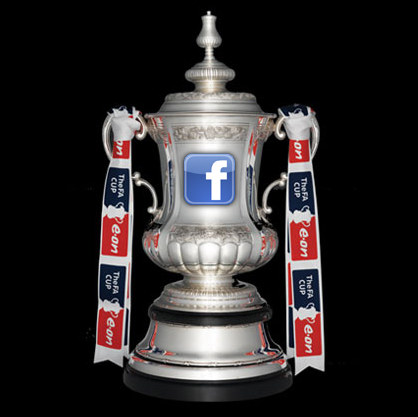 FA Cup football will stream live from Facebook starting from this Friday, when Ascot United face Wembley FC at The Racecourse Ground, in the preliminary match of this season’s tournament.

It’s not the epic Premier standard clash we’d have hoped for, but it’s still a very special event in that this is not only the opening match of the tourney, but also the first to be shown through an online social network. Combining two of the nation’s much loved past-times – Footie and Facebook – it’s pretty groundbreaking and offers great worldwide exposure for teams that may not always get the same media glorification of some of our top teams.

Ascot’s Chairman Mike Harrison backs this sentiment saying “To be involved in the first game of the FA Cup this season is an honour in itself but to be part of a world first and have our match broadcast to a massive global audience is fantastic for our club.”

And of course, not to forget, simulating the social experience of the “beautiful game”, right on your laptop or PC through Facebook chat will be a key factor to the success of bringing the FA Cup to the social network.

Sponsors Budweiser are hosting the game through its Facebook page, with a 7:45pm kick-off this Friday, 19th August.

Keep up with all the Premiership goals with the ESPN Goals app –  a featured Gadget Helpline App of the Day!