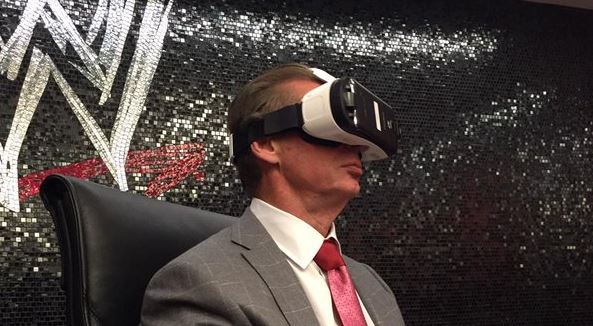 Chief Brand Officer and heir the World Wrestling Entertainment empire, Stephanie McMahon, has spoken about the possibility of the sport entertainment company introducing Virtual Reality content to its programming.

Best known to fans as Vince McMahon’s malevolent daughter, on-screen villainess Stephanie also plays a vital role in the running of WWE as a boardroom executive along with her heavyweight champion husband Triple H and she was in Cannes to talk about the future of the global brand, beyond the mat – and beyond our television sets.

Talking to digital news source The Drum, Stephanie spoke of WWE’s intentions when it comes to the exciting new arena of VR, confirming – “We are definitely exploring that content because I have seen some of the early renderings and it is so cool.”

She added “I am a fan first and foremost – you have to be to be in our business and to be able to walk down the ramp and get in a ring and to see your opponent in the ring – it’s the most unbelievable experience. I can’t wait to see how that unfolds and of course we’ll be doing all of our due diligence and research and if it makes sense for us from a business stand point we will continue to evolve that model.”

So what does this mean moving forward? Will WWE superstars be introducing VR recording gear into their ring attire to capture the experience of being in the ring, presented weekly on the flagship RAW show for the millions and millions of worldwide wrestling fans? The idea definitely offers a lot to grapple with.

Earlier this year the social media-leading wrestling brand launched its WWE 360 experience which works in cooperation with the Samsung Gear VR allowing fans to take in a favourite superstar’s POV while walking down to the ring. Small first steps it seems in a much bigger picture for the WWE.