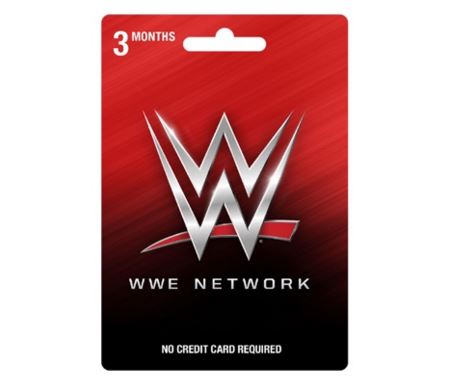 WWE Network has begun selling a gift card just like the iTunes, Google Play and Spotify cards found in many retail stores.

The WWE Network gift card is available at Gamestop and Walmart stores in the US and also through the official website. Weighing in at $29.97 it offers the equivalent of a 3-month subscription at the standard rate of $9.99 with unlimited access to all the live PPV events like the annual Wrestlemania as well as original content and archived wrestling action from the WWE vault.

Another great thing about the WWE Network gift card is that you won’t need a credit card to register for the service meaning no rolling payments after your three months expires, which may come as a relief to parents.

We’re sure that the WWE also knows this new payment method will help boost their digital business by allowing more subscribers, particularly its core youth market, to pay for use of the network which is available through web browser, smart devices and consoles.

At the end of 2015 WWE Network reported over 2-million unique subscribers in almost two years of service and its library has grown to over 3,600 hours of on-demand content available which includes modern and classic matches from the former World Wrestling Federation as well as WCW and ECW.

The introduction of the WWE Network gift card shows the popularity the on-demand service has gained in such as short span of time and its global reach might at some point allow for the same type of payment method on offer to grapple fans here in the UK.