5 Things You MUST See at The Gadget Show Live 2012

It’s the time of year again, with the latest and greatest gadgets vying for your attention on the floor of the NEC Arena in Birmingham. That’s right; it’s The Gadget Show Live 2012!

The show opened its doors to the public today and will do so every day until Sunday 15th, the final day. Around 20,000 gadget lovers are expected to pass through the doors every day, seeking out that new gadget or game they have their eye on or perhaps just something new and exciting.

Gadget Helpline got an early look at the show before it opened at the press day, and we hunted high and low for the most exciting new tech on offer. There are some excellent products to be fondled, from the recently released HTC One X to the as yet unreleased Nokia Lumia 900 and Sony Xperia U and P – and that’s just the smartphones. The latest in TV tech is on offer from the likes of Samsung and LG, games to play on every console you can think of (including a NES and Dreamcast), a zip wire and even Segway racing.

With literally hundreds of stands and many more gadgets to try out, we set about the tricky task of finding five of the best gadgets that deserve your full attention if you’re heading out to the show at any point this week. Check them out, let us know if you liked them at the show, and even let us know some of your highlights from the show by leaving a comment below.

Wandering around the show we found several stands offering full force-feedback racing setups playing various games – one in particular used incredible industrial technology to elevate the chair above the ground, costing around £17,000 for a customised kit. However, after testing them all out (it’s a tough job, but somebody had to do it) we decided that the kit on offer at the Alienware booth was by far the best experience, playing a customised version of the R Factor racing simulator.

Alienware’s racing sim is custom built using some impressive gear, with no part more impressive than the PC that runs it all, which included a whopping 24GB of RAM, no fewer than 3 of the latest Nvidia GTX580 graphics cards and a speedy Intel Core i7 processor. The chair itself is a VRX full force-feedback model from D-Box with the Fanatec Forza racing wheel, pedals and gear stick, along with two Bose satellite speakers which are mounted behind your head and three 27” Acer 3D monitors. Slip on a pair of Nvidia’s Active 3D glasses and blast your way around one of the tracks in 3D, feeling every bump and crash as you would if you were in the car, thanks to the full force-feedback chair.

Check out the video for a look at how the kit works, then go find it for yourself at the show. 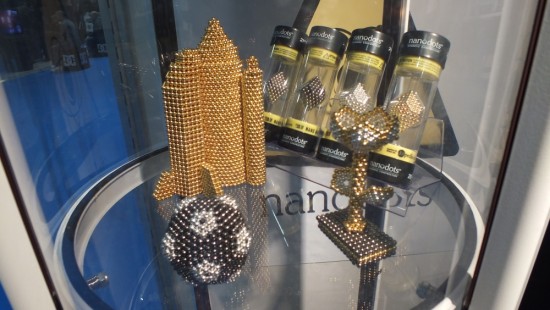 Let’s get this straight before we begin: Nanodots is the next big craze, we’re sure of it. We were a little sceptical when we took a look at what is essentially collectible magnetic balls, but one minute playing with them brought out the little kid in us. These little magnets are available in various sizes and even different colours, adding that collectability factor that makes a craze successful.

You can do just about anything with Nanodots – from simply pushing a few around in your hand to make different shapes to creating huge structures and statues from them. You can also get a magnetic mat which allows you to create your own chess pieces or even make up your own game. The company behind the idea showed us a game they’ve invented call bridges which you can check out in the video below.Nanodots are brilliant for those who love to fidget, and we’ve been assured that carrying them in your pocket along with your gadgets won’t cause any problems whatsoever, so you can take them anywhere. We’re told that Nanodots are hugely popular in the U.S, and they’re now just making it to the UK. If you’re interested you can currently buy some of the kits from Red5 and Nanodots themselves.

If you’re a big lover of multiplayer gaming then you need to head over to LG’s booth to try out their latest Dual Play technology, which is being displayed on their latest Cinema 3D Smart TVs. Dual Play uses 3D to overlay two players’ view into one picture, which is then separated to two separate pairs of 3D glasses. Take the glasses off and you’ll see a mish-mash of 3D imagery, but when each player puts on a pair of glasses they each see their own screen. Finally this will put an end to the classic “stop looking at my screen!” complaint when playing multiplayer games. Check it out in the video below.

LG’s new range of Cinema 3D TVs are excellent and well worth checking out on the whole once you’ve experienced Dual Play gaming. They’re incredibly stylish and slim and pack in some amazing smart features, including a Nintendo Wii-style motion control remote and various apps and games. For more on the LG LM760, LM860 and LM960 in action, check out our eyes-on article. 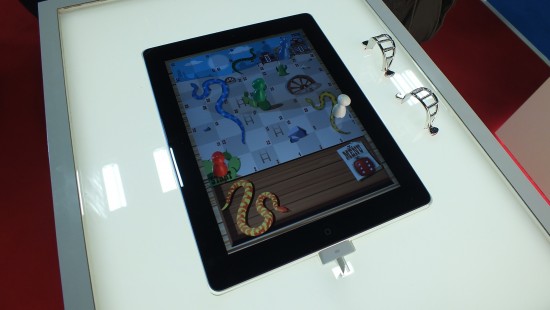 iPieces caught our attention with their new way of playing popular kids games on the iPad. An app download combines with touchscreen-friendly game pieces to create a really fun way of playing old favourites on an Apple tablet. We can see these games becoming hugely popular for parents with iPads who need to keep their kids quiet on long car journeys or over the holidays.

All of the games can be played by several people at one time, with the Fishing Game and Snakes and Ladders both accommodating up to 4 players, and Game of Goose taking up to 6 players.

Costing £9.99 each, there are currently 4 games available: Air Hockey (our favourite), Snakes and Ladders, Game of Goose and Fishing Game. Each pack offers a free download of the game itself from the App Store and the neat accessories which work well on the iPad, iPad 2 or iPad 3’s capacitive touchscreen without causing any damage whatsoever. The games are well designed, colourful, bright and engaging and are easy to get playing. Head over to stand C190 to play the games for yourself at The Gadget Show Live, with plenty of iPads and apps on display to try out. 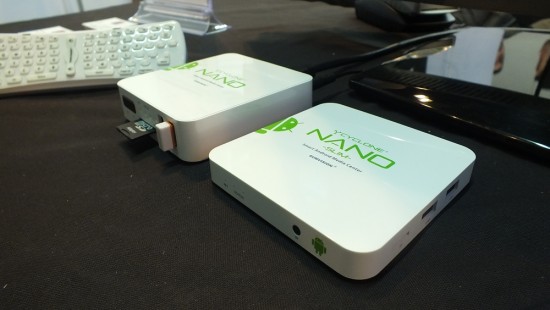 If you like the idea of Apple TV but you’re an Android fan, the perfect solution is tucked away at the Gadget Show Live, just waiting for you. The Cyclone Nano from Sumvision resembles the Apple TV in shape and size but is finished in glossy white with our favourite green robot on the front. Two models are available – the Nano and the Nano slim – with the difference being that the former offers Ethernet connectivity as well as Wi-Fi. Powered by a Cortex A9 processor and Android 2.3, this clever little box is Google certified, meaning you have access to the official Google Play Store for downloading the latest games and apps.

It will stream Full HD 1080p video from the web, from the likes of YouTube and Netflix, and play the latest games, and will accommodate an external hard drive, USB storage stick or SD card to play files locally. The Cyclone Nano has a nifty remote too, which although quite large, offers a landscape QWERTY keyboard and can even be used Wii-style for motion control, using a mouse on the screen. For around £80, this piece of kit seriously impressed us and is a viable alternative to the likes of Apple TV, turning your HDTV into a Smart TV with nothing but a Wi-Fi connection and a HDMI cable.

So those are our highlights from the Gadget Show Live this year, and the doors are now open with tickets available for the remaining days up until Sunday. If you’ve got a free day then we strongly recommend getting down to the NEC to have a look around – you might come away with your new favourite phone, TV, laptop or toy!

If you’ve been to the show already, why not share your favourite gadgets with us by adding a comment below. Now if you’ll excuse us, we’re off to attempt a giant iPhone made out of Nanodots magnets…