Android overtakes Blackberry as #1 Smartphone platform in US 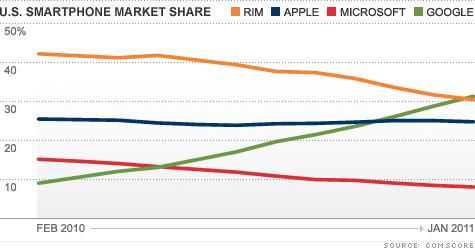 A recent study by comScore has shown that Google’s Android mobile platform is the most used smartphone OS in the United States, surpassing RIM and their Blackberry platform.

Almost one third (31.2%) of US smartphones now run Android of some form, compared to previous market leader RIM, with 30.4% of American smartphones being Blackberrys.

Suprisingly, Google’s Android platform started 2010 with a market share of just 7% compared to RIM’s then market leading 42% share. The rise of Android has been well documented, with a reported average monthly growth of 2% since January 2010. By June of 2010, Android had overtaken Microsoft’s Windows Phone platform and 4 months later in November, it sailed past Apple’s iOS.

One year on from its 2010 opening share of 7%, Google has finally overtaken Blackberry as the leading smartphone platform in the US. ComScore’s study reveals that in January of this year, Android narrowly pipped RIM/Blackberry to the number 1 spot, with 31.2% of US smartphones running its OS.

Google’s advantage over its competitors, and perhaps the reason Android has shot to the top is that the OS is open-source – free for phone manufacturers to adopt. Whereas only Apple use iOS for their devices, and RIM only use the Blackberry OS for their own smartphones, Android is used by a wealth of big name phone manufacturers. Motorola, HTC, Samsung, LG and many others are already onboard with Android, meaning more and more smartphones hit the market each month running Android, but not all from the same manufacturer.

Are you an avid Android fan, or do you think Blackberry or iOS should be top of the pile?