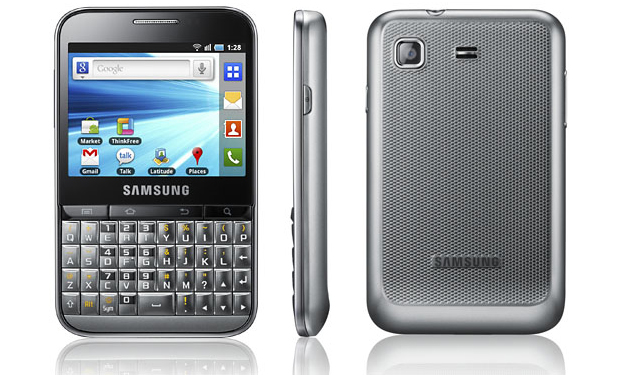 Samsung have just finished hosting their SEA Forum event over in Singapore, where a few new products have snuck out. Most notably is a new addition to their popular Galaxy range, the Samsung Galaxy Pro.

Samsung have opted to use Android 2.2 (Froyo) on the Galaxy Pro as opposed to the newest version, 2.3 (Gingerbread). Other specifications include an 800MHz processor, a 3MP rear camera, HSDPA, Wi-Fi, Bluetooth and a 320×240 resolution on that 2.8 inch touchscreen we mentioned before. Samsung have also layered their usual TouchWiz interface over the top of the Android 2.2 OS, which includes Samsung’s new ‘Social Hub’ feature which interlinks all your communications into one user friendly interface.

3 UK have already confirmed that they will be stocking the Galaxy Pro in a blog post. They’re keen to promote the phone’s Wi-Fi hotspot capabilities, which allow you to share your mobile data connection with other mobile phones, turning your Galaxy Pro into a hotspot. This sort of data usage is pretty heavy, so Three are recommending that you would use their massive “all-you-can-eat” data plan when using this feature.

Full specifications for the Galaxy Pro have not yet been released, and neither has a release date. CNET are reporting that the phone will be released in the UK before anywhere else, which will purpotedly be at the end of this month.

The Samsung Galaxy Pro is the latest in a line of candybar QWERTY handsets aiming to take a shot at the Blackberry market, we expect it to go head to head with HTC’s ChaCha handset when it goes on sale here in a couple month’s time.

If you like the sound of the Samsung Galaxy Pro, you can check out 3 UK’s preview video below.