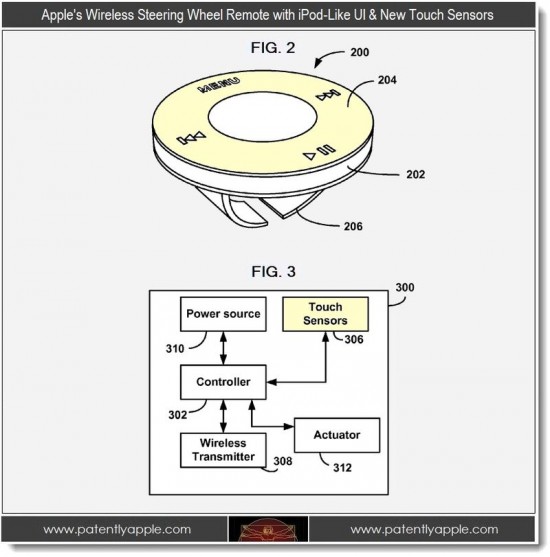 After conquering most forms of the entertainment market Apple is finally turning its mind towards the in car market that it has previously ignored, by filing a new patent with the US Patent and Trademark Office for a new in-car steering wheel control system.

Nowadays many new cars will already have a built-in control system in the steering wheel or Apple device connectivity, but with Apple’s core demographic being just about anyone with a pulse, the company has come up with a new accessory to make driving and playing your favourite tunes easier.

There is no real information about how the device is connected to the Apple product and the in-car audio system, but we would assume some sort of FM transmitter, Bluetooth or a wired-in car option which would require an installation.

Much like us in the UK, some US authorities are preparing to clamp down on the “hands-free” operation of smartphones and other devices in vehicles, so Apple’s new patented product, if released, will definitely find a home very quickly. 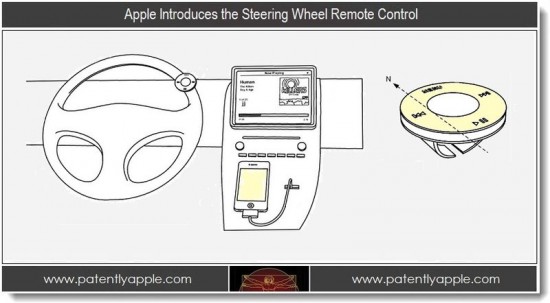 The device itself will feature a clip on aspect for the vehicle’s steering wheel, and most interestingly the display will have a touch-sensitive faceplate.

The article states that “The touch sensors can be configured to detect contact of an object such as a finger as well as the location and pressure being exerted on the surface of faceplate by the finger or other object” and with Apple’s history with touch-controlled devices, it’s clear to see Apple favour touches and swipes over buttons!

We will be interested to see what Apple can do with such a basic setup as you can always be sure that they install some “Must Have” features in all of their devices.

You can also check out our “Compare Phone Prices” tool for the best Contract, Pay As You Go and SIM free deals for Apple’s iPhone 4S by clicking the tab above.