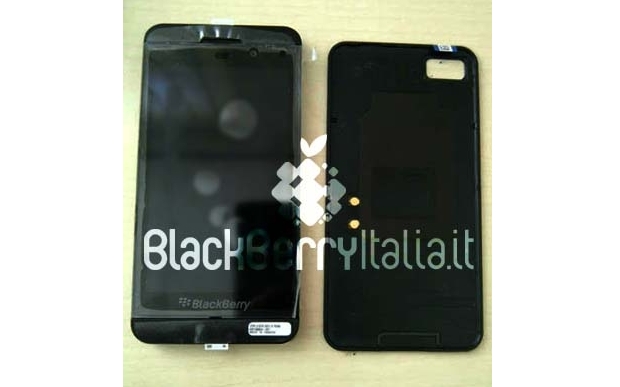 The first smartphone due to launch with the new BlackBerry 10 software has leaked in pictures online, showing the latest version of the ‘London’ prototype that we’ve seen before.

We’ve got another chance to get a glimpse of the first full-touch smartphone to run RIM’s new software courtesy of BlackBerryItalia, who recently posted the pic. From the image we can see that the handset will not be fully sealed, as has become the trend with smartphone makers recently, but will have a removable back panel.

RIM will be splitting its BlackBerry 10 smartphones into two groups: the L Series and the N Series. This handset belongs to the L Series, which is indicated by its full touchscreen. The N series will carry the more traditional BlackBerry models, with a QWERTY keyboard and potentially a touchscreen for good measure.

After revealing BlackBerry 10 in full (previously ‘BBX’), RIM gave out phones for developers to test the software and their applications on. This basic phone was known as the Developer Alpha, and looks very similar to the phone pictured above.

The BlackBerry London will boast an impressive 1280 x 768 pixel display, which will likely be 4.3-inches in size. It’s likely that the phone will also feature 4G LTE connectivity, which should work here in the UK by the time it launches, which is said to be early next year.

BlackBerry 10 will be the operating system, which will look completely different to any version of BlackBerry software before it. RIM has already shown off a neat camera app which allows the user to effectively rewind through a photo to find the perfect split-second shot, as well as plenty of swanky touch gestures.

Will the BlackBerry London be able to rival the likes of the iPhone 5, Lumia 920 and Galaxy SIII? Let us know your thoughts on our comments below or via our @Gadget_Helpline Twitter page or Official Facebook group.