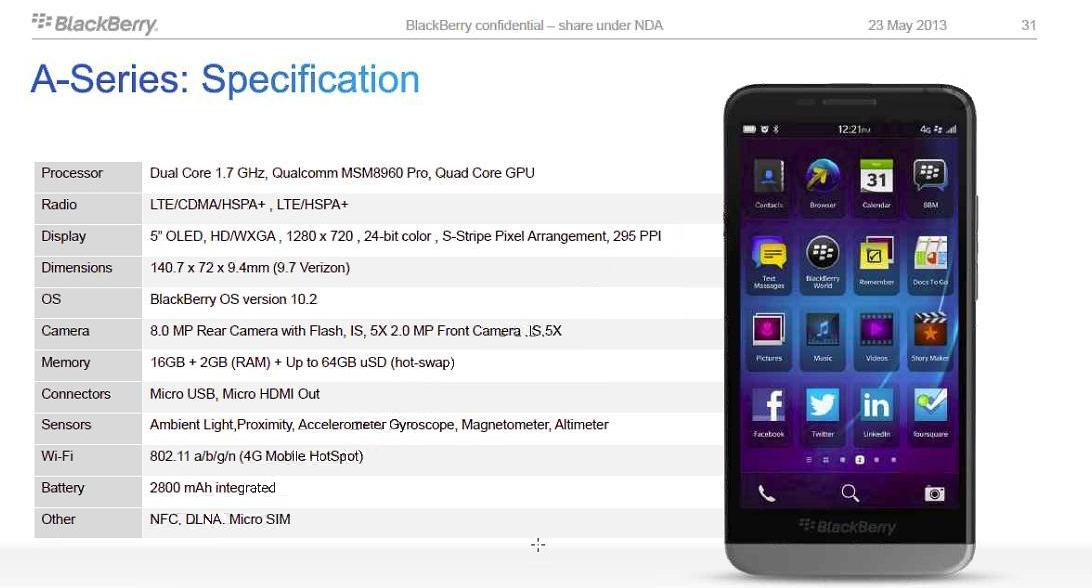 BlackBerry’s ship is currently a leaky with regards to its incoming BlackBerry A10 as yet another spat of information has been leaked online this time confirming a load of the specifications for the next BB10 sporting handset.

Those folks over at the CrackBerry forums  have given away a screen cap which reveals some of the specifications of the incoming large screened BlackBerry A10 smartphone. However the slide itself was from back in May so if this is the real deal things could have changed or there are some seriously laid back leakers in BlackBerry HQ. 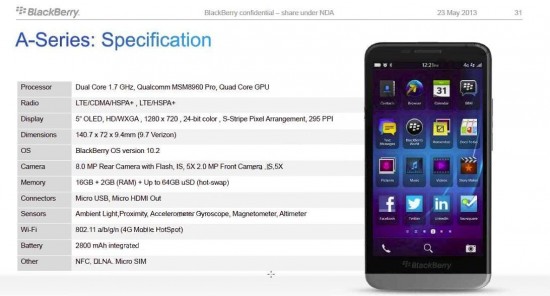 Last week some images of the A10 were leaked online as well as some shoddily shot videos, but now a fuller list of specifications have been leaked online. They are:

Most of the info has already been leaked online like the inclusion of a 5inch screen that is 1280×720 at 295ppi and the internal powering by a dual-core 1.7GHz processor with 2GB of RAM and 16GB internal storage.

Some of the interesting bits of the leak is that a US Verizon network variant of the A10 will be available and with it fans will get an extra 0.3mm of thickness, now what this suggests we can’t confirm but the possibility of 4G or something extra is likely to fill that extra space.

BlackBerry has recently revoked its claim to bring the latest BlackBerry 10 OS to its older range of Playbook Tablets so the company does need to start expanding its OS onto some larger device if they are looking to compete with the Samsung’s, HTC and Sony’s (we won’t even bother with Apple) in the future months. The A10 could just be that.