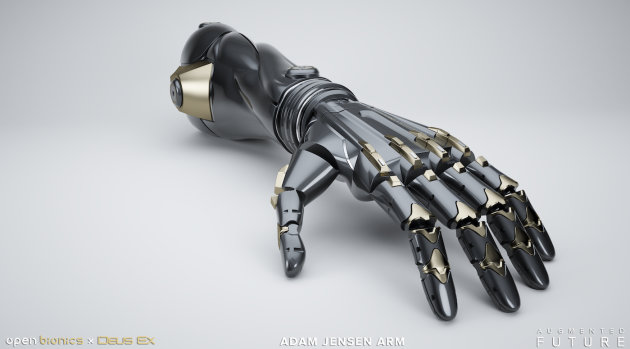 Deus Ex as a franchise has been pretty ground breaking. The first game has easily been entered into the annals of gaming classics, and it’s easy to see why. The games themselves are more than the sum of their mechanics as far as gameplay and story goes. The games have a definitive cyberpunk arm style difficult to find anywhere else.

Even the reboot, 2011’s Human Revolution took this and ran with it, throwing a modern spin on the bionics and augmentations. Many were the gamer who looked up the sleek black and gold bionics heavily featured in the game and lusted for them.

With the upcoming release of Deus Ex: Mankind Divided comes a frankly unforeseen and surprisingly logical marketing decision when thought about.

Open Bionics, a company specialising in “open-source” prosthesis are teaming up with Eidos-Montreal, and Razer in order to create Deus Ex inspired bionic arms. The pictures are out on the two models planned, and they look phenomenal.

The two models the “Adam Jenson Arm” and the “Titan Arm” are two vastly different styles both hearkening back to the stylish cyberpunk world. Both decked out in gunmetal grey and muted gold, the “Adam Jenson Arm” is worked to be a replica of the titular heroes augmented physiology. Whereas the “Titan Arm” is designed as a more stylistic, sharp, jagged, geometric statement.

Both of the arms are likely to be shown at E3, guaranteed alongside the Deus Ex: Mankind Divided booth. Razer is on board to assist with this and will be using its stargazer webcam to show people what it would be like to control an artificial limb via movement tracking.

Open Bionics are no stranger to the creation of some of the coolest and easiest to access prosthesis available, the fact that they’re open-source allowing consistent development and customisation of their products on a person by person basis.

Needless to say, if they perform half as awesome as they look they will be a very attractive proposition for any amputee cyberpunk fans.