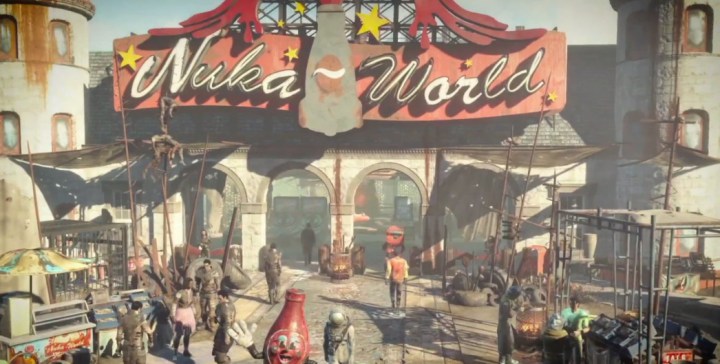 Along with the expected gamut of Elder Scrolls information came the follow up on the status of fallout over the coming year, and it came in two varieties. The first the flavoursome Fallout 4 DLC barrage and the second being an update on Fallout Shelter.

We’ll tackle the Fallout 4 downloadable content first. This appears to take three forms. Two updates to the Workshop, and a third as yet mystery update teased with a video of a Nuka-World theme park entrance.

The welcoming gates of Nuka-World

The two Workshop updates are coming as their own forms. The first, will be named Contraptions Workshop and is going to involve the creation of things such as conveyor belts, sorting machines, pillories and things of a similar ilk, it seems to be more focused on the industrialisation of your settlements, the teaser shown actually showing something akin to a manufacturing plant.

The second Workshop related DLC takes the form of the Vault-Tec Workshop, this one looks to be aimed at the moving of your settlers to underground locales, why search for vaults when you can build your own. The video actually showed a great deal, allowing you to build a fully functioning vault with all the available mod cons, whether this allows you to hollow out mountains to place your vault within or whether there are specific vault locations remains to be seen however.

The final piece of Fallout 4 downloadable content comes in the form of a teased video for Nuka-World, a theme park based around the popular tipple. It’s been stated to be the final DLC for the game, and the second story based DLC. It’ll be interesting seeing what the Nuka theme park has in store for our characters, especially considering that a large part of the description paints it as a “lawless city of raiders”.

Everyone’s lining up for the new Fallout Shelter update

The last bit of Fallout content to eek out of the conference concerned the ever popular Fallout Shelter mobile game. The game appears to be getting something in the way of free DLC via an update, it looks set to include, new enemies, new challenges, new characters, it looks like it’s getting quite a bit.

Furthermore, the game is being expanded. Fallout Shelter is coming to the desktop, PC and Mac galore. This is an interesting change, it’s rarely you see a mobile fixture make its way to the denizens of large scale gaming, hopefully this paves the way for some seriously cool updates in its future, provided Bethesda continue to see it worthy of support.