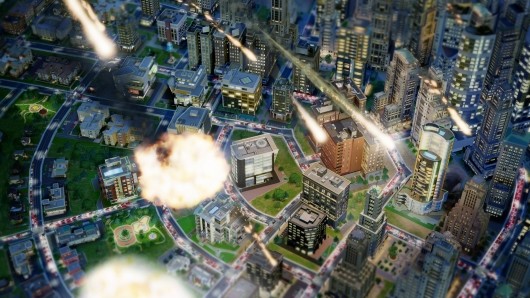 Following a difficult first week for SimCity which saw developer and publisher Electronic Arts under fire from fans, the company will be extending a peace offering in the form of free games to everyone who has bought and registers their copy before 26th of March.

The 2013 remake of the classic PC construction game was launched on March the 5th and currently requires SimCity to be ‘always online’ for players to enjoy building, maintaining and ‘playing God’ over their own massively customizable created civilization. An unexpected side-effect of running SimCity this way is that the vast number of players trying to connect to the EA server to play the game are experiencing severely slow load times and lagging. Other bugs and glitches have also been reported en masse by irate would-be Mayors.

Despite EA’s best attempts to explain an offline mode not being in the best interests of the ‘vision’ for SimCity players aren’t taking the news lying down. Addressing this, but giving no indication that the need for online connection is set to change, the publisher has instead vowed to give each gamer who purchased a PC copy of SimCity another EA title completely free of charge through its digital Origin store.

The 8 titles on offer are available to gamers who have bought and registered their copy of SimCity between March the 5th and March the 26th and include Mass Effect 3, Battlefield 3, Dead Space 3, Bejewelled 3 and some other titles that aren’t the third in their series – Medal of Honor: Warfighter, Need for Speed: Most Wanted, Plants Vs. Zombies and SimCity 4.

In a co-incidental footnote, Electronic Arts CEO John Riccitiello has unexpectedly announced his resignation from at head of the company and as a member of the board of directors after six years on March the 30th.