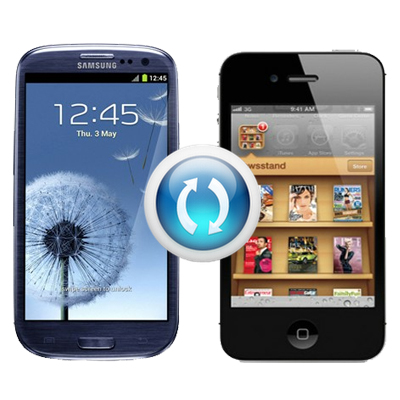 Samsung has partnered up with the makers of Easy Phone Sync to provide a quick and easy method to shifts photos, files and contacts for those jumping ship from the Apple iPhone onto Samsung smartphones including the new Galaxy S III.

If like us, you’ve been hanging onto that iPhone 4S, eagerly awaiting news of a follow-up but have now been wowed by the stunning new addition to Samsung’s Galaxy S line-up, the S III, with its super-fast 1.4GHz quad-core processing, pre-loaded Android 4.0 Ice Cream Sandwich operating software and range of helpful and appealing S-Features, then you might have given thought to hopping over and seeing how things are on the other side.

This can often be a taxing undertaking, shifting vital information and data from one brand of device to a completely different one. But developer Media Mushroom has a solution in the form of the Easy Phone Sync app, which can now be downloaded for any Samsung mobile running Android software from the Google Play store.

Easy Phone Sync hooks up your Samsung device to iTunes through mobile and PC based applications and lets your Android gadget talk to the Apple software and shift over content such as all your important contacts and texts as well as multimedia like songs, videos, podcasts and photos.

We know it can be a strange for some to believe in anything other than Apple but Samsung gives just as much, if not better in some instances. So, if you’re one of those brave enough to try new things we suggest you grab this app and make the whole experience a bit more painless!