We were beginning to think that every gadget at Samsung’s June 20th Galaxy and ATIV event had been revealed ahead of schedule, but now we’re hearing reports of a second generation Galaxy Camera that’s hiding away, ready to be revealed in London next week.

By the looks of things Samsung will be making some big changes, most notably in the design department. The Samsung Galaxy Camera will evolve from a compact, glossy white device into a full-blown DSLR-type, complete with black casing, EVF and hotshoe for flash modules.

With ‘NX’ tagged on to the end of the product name we know that Samsung will be bringing mirrorless technology to the Galaxy Camera, which also means interchangeable lenses. Leaked press shots show that there will be three OIS lenses on offer, including an 18-55mm (likely included with the camera) and an 18-200mm long-range lens. 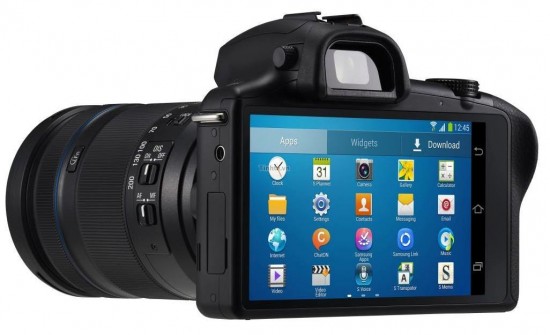 The camera features a large rear touchscreen which allows Android to be operated just as you would on a smartphone or tablet. Android Jelly Bean 4.2 is the operating system of choice and so you have access to apps via the Play Store as well as Samsung’s own TouchWiz apps. We’re also told there’s a 20.3 megapixel APS-C image sensor inside, ISO sensitivity up to 25,600 and of course, Full HD (1080p) video capture.

If you’re sceptical about the authenticity of this leak then how’s about some confirmation from Samsung CEO J K Shin? Speaking to the press recently, Shin told that; “Samsung will release our latest mirrorless camera that runs on Google’s Android software.”

We don’t know when the Galaxy Camera NX will officially launch, but we’d say the Galaxy-themed event that’s scheduled for June 20th is a good bet.