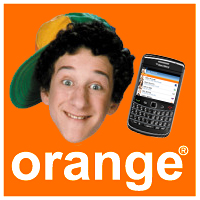 The U24 scheme is designed for the under 24s (wouldn’t ya guess) and is available to any new or current Orange subscriber who adds at least £15 of credit a month to their account. For this small fee, in addition to the aforementioned offerings, calls made to fellow Orange customers will be completely free of charge.

Orange says “Whether they’re going away to university, or starting out in a new career, with U24 we’re hoping to make life a little easier, providing them with an extra mobile data allowance and the potential to call and text over 27 million people as often as they like – all for no extra charge”.

How do you know who you can call for nowt? Well that’s handled with a downloadable app available for Android smartphones, iPhones, and BlackBerrys, which presents a list of your nearest and dearest – with no excuses not to call back your mum if she’s on the same network!

Telecoms insiders speculate that other networks will be quick to offer a similar deal to their rival in an attempt to be “down with the kids” and we’d think O2 would be keen to make such as gesture, with numerous customers threatening to hang up over last week’s troubles with the mobile network.