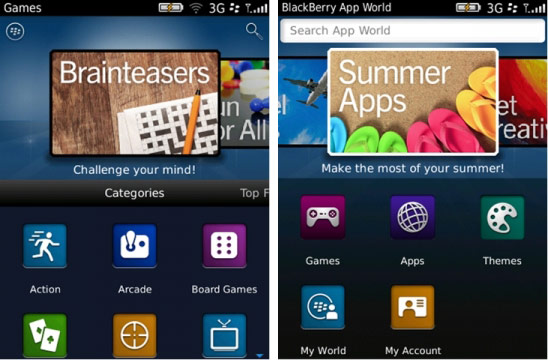 RIM has made a beta version of App World 3.0 available to participants of its Beta Zone testing program, and many users are currently testing the app. We’ve been treated to some screenshots as you can see above, and it looks to be a marked improvement on App World 2.0.

App World 3.0 has been designed with speed and ease of use in mind, with RIM confident that you’ll be able to find the app or theme you’re looking for much quicker and easier thanks to their redesign.

The homepage has received a long overdue makeover and seems to have taken tips from Google’s Android Market, with popular apps or app categories displaying in a scrolling carousel at the top of the screen. It seems pretty obvious that RIM have designed App World 3.0 with touchscreen smartphones in mind, obviously to suit the trio of new touchscreen Blackberrys they recently announced.

When you’re checking out an app you’ll now have reviews, summaries and screenshots all on one page, as well social network integration so that you can share your favourite apps with your friends via Facebook, Twitter and more.

Despite Blackberry App World flagging well behind Android and Apple in content and downloads, the upgrade is one that is welcome with Blackberry users. We expect App World 3.0 to be fully released to the public within the next month.