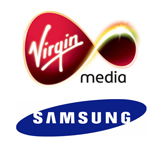 Samsung has snagged an exclusive deal to build the next generation of Virgin Media TiVo set top boxes.

Speaking of the new contract, which should bring in a new, more reliable box to deliver digital content and provide high quality recording and playback of our favourite programming, Samsung says “This is a major win for Samsung Electronics and one that will strengthen Samsung’s position as a technology supplier. We are proud to have built upon our strategic relationship with Virgin Media.”

Virgin Media backs these sentiments “Our partnership with Samsung will help bring the benefits of next generation digital entertainment to even more homes across the UK.”

Cisco were the tech co previously working on the contract, but Virgin has turned to old pal Sammy who provided redesigned and more compact versions of the V+ HD box to replace the old Scientific Atlanta sets several years back.

Having set sail from the States, the first TiVo service to come to Britain was back in 2000 and a lacklustre push by BSkyB lead to poor sales and little interest. Imitators followed, but it wasn’t until the late 00s when Richard Branson’s Virgin linked up with the TiVo brand and the first co-created Virgin Media / TiVo products were launched in December 2010.

Samsung will refresh the tech and it’s suggested we’ll see a public unveiling at theInternational Broadcasting Convention in Amsterdam this week.