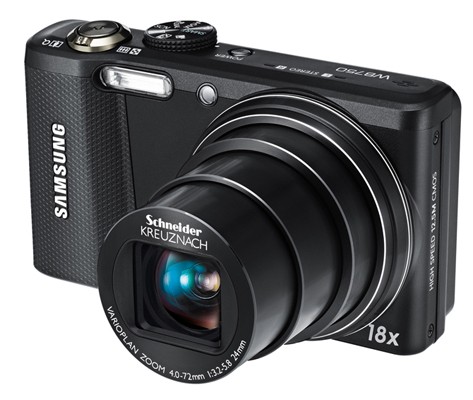 As well as announcing the new NX200 interchangeable lens camera, Samsung also announced a new compact digital camera called the WB570 which will no doubt be a success with anyone who wants an impressive point and shoot.

The new super-zoom features a 12.5MP BSI (Back Side Illuminated) CMOS sensor, that according to Samsung produces consistent professional images and videos. Samsung say that the sensor features pionnering technology which will reduce noise and image distortion to ensure you capture an image that is clear and vibrant – even in low lit conditions. The WB570 also has an excellent zoom range (I suppose you’d expect that though being a super-zoom camera), it has an 18x Optical with the addtion of 24x Smart Zoom technology, which makes it’s the longest zoom range camera Samsung sale.

As well as being able to take high quality images, you’ll also be able to capture HD video on the WB570 at 1080p with the additon of another nifty feature that means while your recording video you can also capture images at the same time, albeit at a slightly lower 10MP resolution; still pretty good though I’d say.

The WB570 has a variety of built-in functions allowing you to easily capture panoramic pictures, which when used with the supplied software, will allow you to convert the image to 3D. You’ll also be able to take advantage of the HDR (High Dynamic Range) feature which will produce a vivid range of colours which will really make any image stand out.

On the back of the WB570, there is a 3-inch HVGA TFT LCD screen which should allow you to view all the detail before you capture your image.

Unfortunately Samsung have not realeased any information regarding pricing or availability at the moment, however you’ll be the first to know as soon as more info becomes available.

Let us know your thoughts about the WB570, would it be a camera you’d buy? Leave us your comments below, or tweet us @Gadget_Helpline