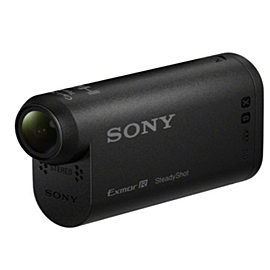 Sony has gone extreme with its latest high definition camera tech with a head mounted video shooter perfect for mountaineers and skydivers and anyone who might want to share a death-defying moment in a super-sharp HD video POV.

You’d think a camera that went through the same rigorous and rough and tumble excitement as its wearer might be pretty low spec in case of any inevitable breakages. But no, Sony’s HD head set does in fact feature some top spec tech including EXMOR R CMOS image sensor and Carl Zeiss lens – a name familiar with cam fans and those looking to buy Nokia’s impressive new Pureview 808 41-megapixel camera phone. All this is rammed into the light weight head cam which is protected by a waterproof and shatterproof rugged casing and features Sony’s SteadyShot image stabilisation to ensure a sharp shot whilst on the move.

Sony is expected to announce more details as well as a pricing and availability in the next few months and it seems the Japanese tech co. is leading the way when it comes to funny headgear. Last year unveiling its HD Personal Viewer – a 3D visor which can be hooked up to Sony TV sets and be used for Playstation 3 gaming.