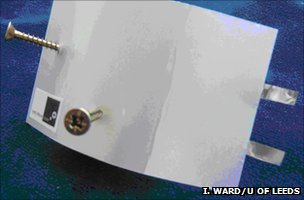 Researchers from the University of Leeds, UK, have discovered a way to

Studies have shown that replacing the hazardous liquid electrolyte found in Lithium batteries with a new type of polymer jelly will reduce size and price as well as making batteries safer to dispose of.

If the lithium jelly battery takes off, we could see laptop batteries become smaller and lighter. This could mean a whole new generation of lighter, cheaper gadgets in the very near future.

Lithium batteries are also used in electric cars, and the researchers at the University of Leeds believe that a change to lithium jelly batteries could result in more efficient electric vehicles.

The change from a liquid electrolyte to a jelly polymer would also mean a reduction in heat generated by the battery itself. Electric car manufacturers have been forced to develop special steel enclosures for the lithium batteries in their cars to deal with overheating issues; something researchers say will be unnecessary with the new jelly lithium batteries.

“The polymer gel looks like a solid film, but it actually contains about 70% liquid electrolyte,” explained the study’s lead author, Professor Ian Ward from the University of Leeds.

The image you see at the top of the page is one of the original test batteries, complete with some screws jammed in to show just how durable and tough the new technology can be.

We’re all for cheaper, lighter and smaller gadgets, so we hope major gadget manufacturers take note and start using the new technology in their products in the future. Now, all this talk of jelly has made us hungry, so if you’ll excuse us..