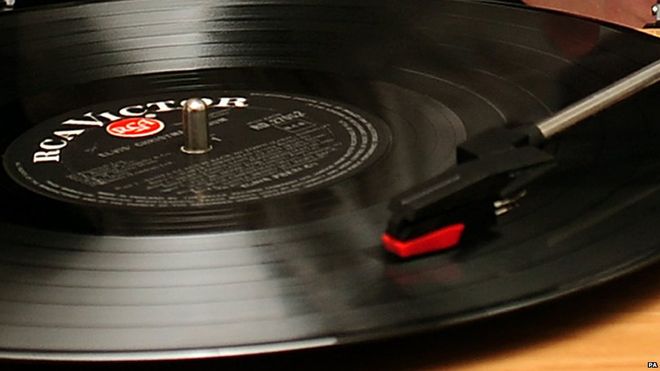 Vinyls. Those big freaky bumpy discs without any shiny rainbows on them. They’re strange, they’re somewhat odd… and yet, also, very interesting to watch as they spin around on the turntable and play crackly but crisp music. A lot of people probably agree, as vinyl discs are still in production, and indeed in the UK a soaring market for the discs is resurgent amongst music fans.

It’s not just dance music or instrumentals for DJ’s too, in fact chart toppers have made their way onto vinyl and are selling out country wide. It’s unsurprising that a brand new vinyl only chart has just appeared from the people behind all the other charts at officialcharts.com.

Vinyl is most certainly back – with the new chart being dominated by music that in fact originally debuted on vinyl, with some indie newcomers mixed in there. The vinyl albums business is still going strong, some people really want to listen to these older albums as they were originally played, on a record player. Led Zeppelin’s Physical Graffiti sits at the number two position, below Noel Gallagher’s Chasing Yesterday. 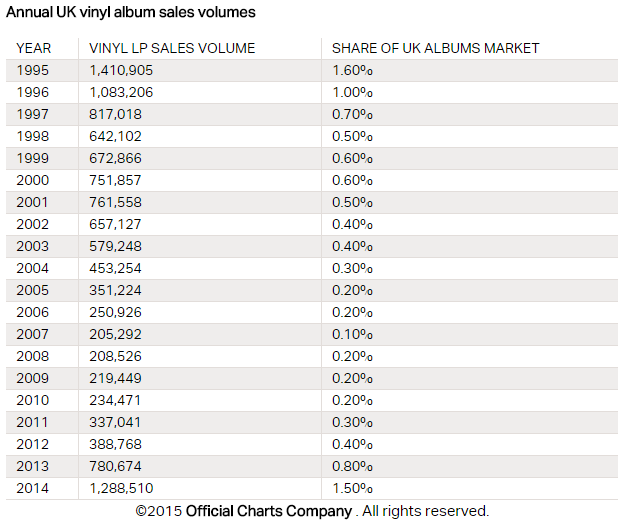 Biting music industry commentary aside, it’s a great platform for new artists to get their impressive vinyl sales up there on a ranking system. Cue bands like Public Service Broadcasting, a techno duo whose beats feature old BBC radio announcements and the occasional bit of banjo, and Royal Blood, another duo featuring good old fashioned rock and roll, hailing from Brighton. Both have hit the charts in the middle part of the top ten.

As for the singles, there’s a good mix of new and old, from David Bowie’s Young Americans to Uptown Funk – both distinct crowd pleasers, both from two very distinct points in time. Frankly the merging of the old and new in the chart is somewhat fascinating, although the singles results for Q1 2015 also show a fair amount of Noel Gallagher. Three songs from Noel Gallagher’s High Flying Birds feature – he must be doing well these days.

Figures are showing massive resurgence in the vinyl market – sales figures unmistakably dropped following 1995, down from 1.4 million units sold that year to an all time low of just 205,000 in 2007. However, since then the sales have begun to climb, reaching 1.2 million units sold in 2014, and rising. Vinyl is most certainly back in business.