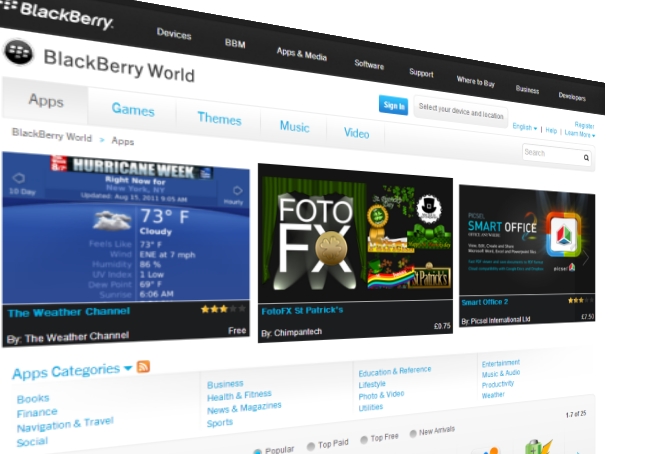 The BlackBerry reinvention is well underway with the Z10 smartphone shipping now and coming loaded with a brand new operating system called BlackBerry 10. The Canadian company, formerly known as Research in Motion (RIM), has today announced that its BlackBerry World app store has reached a milestone of 100,000 apps available and 30,000 of those have arrived since the BlackBerry Z10 was announced in January.

Six weeks later and BlackBerry World has seen an influx of developers offering up new helpful and entertaining apps for improving communication and lifestyle through the Z10 smartphone and future models. These apps include entertainment platforms such as Rdio and chat tools such as Whatsapp and Skype. High-profile news sources such as The Wall Street Journal and CNN have also contributed apps to the market place and today Amazon’s Kindle has been announced as the latest addition bringing the popular eBook software to BlackBerry for the first time.

Martyn Mallick, Vice President, Global Alliances at BlackBerry spoke of his company’s achievement stating “The response to the BlackBerry 10 platform and applications has been outstanding. Customers are thrilled with the applications already available, and the catalog just keeps growing, now with more than 100,000 apps.”

BlackBerry 10 is currently only available on that flagship Z10 but this March BlackBerry will launch another handset called the Q10 which will allow the BB10 mobile software to be used with a traditional style QWERTY keyboard.

Here’s the full press release from BlackBerry on its 100,000 app milestone:

Application catalog grows by more than 30,000 apps in seven weeks

More top brands building for BlackBerry 10 as platform launches in the U.S.

Today, Amazon Kindle, OpenTable and The Wall Street Journal are available to BlackBerry 10 customers and in the coming weeks CNN, The Daily Show Headlines, eBay, eMusic, Maxim, MLB at Bat, MTV News, Pageonce, PGA, Rdio, Skype, Soundhound and Viber will be available for download or purchase.

BlackBerry 10 customers already have access to leading apps and games, including 8tracks, Angry Birds Star Wars, ATP World Tour Live, BBC Top Gear News, Bloomberg Anywhere, CBS Sports, Delta Air Lines, F1 2013 Timing App CP, Facebook, Foursquare, Jetpack Joyride, Keek, LinkedIn, Navita Translator, Need for Speed, NHL GameCenter, N.O.V.A. 3, The New York Times, PressReader, Slacker, Songza, Twitter, UFC, USA TODAY, Waze, WhatsApp, and Zara.
“The response to the BlackBerry 10 platform and applications has been outstanding. Customers are thrilled with the applications already available, and the catalog just keeps growing, now with more than 100,000 apps,” said Martyn Mallick, Vice President, Global Alliances at BlackBerry. “Top brands and application providers are joining us every day and are seeing the benefits of being early supporters of the new platform. We constantly hear from developers that the BlackBerry 10 tools are easy to build with and that we provide opportunities for app differentiation that they do not see on other platforms.”

“It now appears that the already impressive levels of developer support for the BlackBerry 10 platform are accelerating into the launch window for the BlackBerry Z10. The prospect of a very robust app catalog can only bolster momentum for the product and the platform itself,” said John Jackson, Research Vice President, Mobile & Connected Platforms at IDC. “The ability to attract and sustain developer support is like lifeblood for any mobile platform, and it’s not something that simply happens. This progress is a testament to BlackBerry’s early and innovative engagement with developers worldwide and the innovative architecture of the platform itself.”

BlackBerry 10 applications take connecting to the next level with the ability to leverage social, gamification, and integration frameworks that other platforms are not able to offer. Customers can easily share applications with those in their social networks including BBM™ (BlackBerry® Messenger), Facebook, and Twitter. Applications can incorporate gaming features such as leader boards, badges, rewards and more using the Scoreloop tools, and BlackBerry 10 applications can tie to core OS integration points to allow developers to create compelling experiences to keep people moving and flow with BlackBerry 10 experience features.

In addition to apps and games, BlackBerry World for BlackBerry 10 offers access to one of the most robust catalogs of music and video content for mobile users*, with partnerships across all major movie studios, all major music labels and television networks.