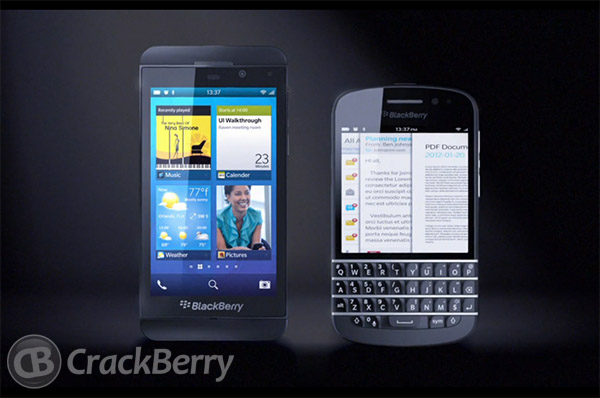 The first BlackBerry Bold smartphone to use the new BlackBerry 10 operating system has made a surprise appearance online, thanks to an official video by RIM leaking online.

An internal marketing video from BlackBerry makers Research in Motion somehow made its way onto video sharing site Vimeo, but was very quickly removed. Thankfully the good folk over at Crackberry some screenshots were grabbed before the video disappeared into the depths of the internet.

We already know that the new range of BlackBerry 10 phones will be split into two series – the full touch L series and the touch and type N series – but so far we’ve only seen pictures of the first L series phone. Thanks to this recent video, we now know what the first N series phone is expected to look like.

On the left we have the L series phone that’s leaked before, and is rumoured to be called the BlackBerry London. On the right we have the N series phone, with a very similar shape and keyboard design to the recent Bold 9900. The difference comes when you look above the keyboard, where a much larger touchscreen takes up most of the phone.

For the N series BlackBerry 10 phones we’re expecting to see touchscreens of 3-inches in size and above, which should make these phones much better for web browsing and games than previous BlackBerry Bold models, which usually have a 2.6-inch screen.

As for the source of the video and its authenticity? It appears that a chap named Rob Jury, the maker of the top secret video for RIM, uploaded it to Vimeo. Whether it was a mistake or not remains to be seen, but we’re glad to have gotten a glimpse of the new BlackBerry Bold.