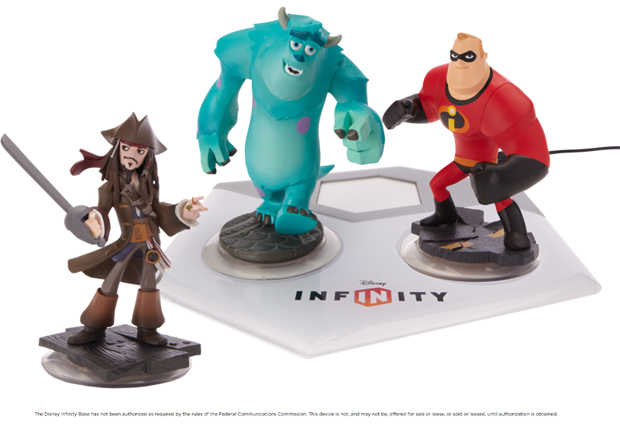 Disney Interactive has announced its response to the popular video game/‘physical’ toy Skylanders, and as well as unlocking a massively mouldable reality based on many famous Disney and Pixar characters, the exciting first trailer has unlocked the kid inside of us here at the Gadget Helpline!

Imagine a universe where all your animated favourites can interact with each other and explore each other’s worlds like never before. That’s what Disney Infinity will be all about when it launches for Playstation 3, Xbox 360, Wii U, mobile and Windows this June.

Gamers will be encouraged to collect a range of playsets (three figures per pack), and using an Infinity base supplied with the initial purchase these models will unlock further pieces of the virtual gaming experience. Along with a series of additional cards the array of accessories and abilities can be expanded even further.

The trailer features some of the starting characters including Jack Sparrow of Pirates of the Caribbean, Sully from Monsters Inc. and Mr Incredible from The Incredibles, all in vast and colourful settings from their respective movies.

With each piece of this interactive puzzle another character and domain will be accessible to use in a creative ‘Toy Box’ mode and the Infinity game offers massive crossover potential and collectability appeal with imagination being the only limitation (and provided you can afford to keep up with the additional figures released throughout 2013).

With the successful Skylanders in hindsight Disney is late to the party but does look to capitalise on a tried and tested concept, and where Activision relied on building around just one existing character (Spyro), Disney Interactive has a huge back catalogue of much-loved heroes and villains from franchises to base the Infinity experience on (Toy Story, Cars and Nightmare Before Christmas characters appear in the promo).

We should not forget the huge news which rocked the entertainment world last year, when Disney had acquired all rights to the Star Wars license, making the future of the Infinity game all the more intriguing. We wait to hear more about the game with a countdown timer on the official website heading toward the 1st of June.