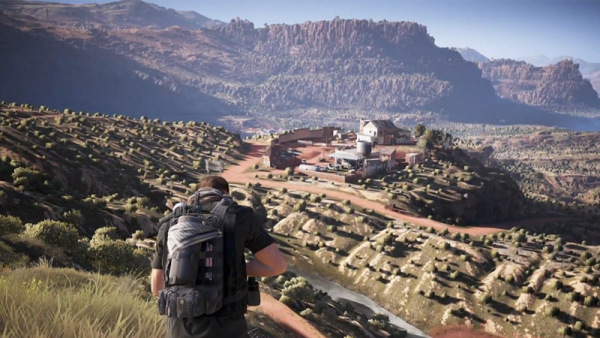 The very first trailer brought to us by Ubisoft at E3 was for the much anticipated Ghost Recon Wildlands, and we’ve been waiting for a long time for any hard information for a little while, the drip feed of information has ended, and now it’s coming thick and fast.

The game is a significant departure from the most recent iterations of the Ghost Recon franchise, no longer set in tomorrow AD, the game finds itself in the present day. Gone are the worn computers of the future soldier program, gone are the unmanned armoured walkers, gone are active camouflage systems. All you get, are your top of the range military gear, and the head on your shoulders.

The cinematic trailer (which they showed first of course) was very good looking. It gave us the perspective of the as yet unnamed head of the Santa Blanca drug cartel that the Ghosts are tasked with removing from Bolivia.

The voice over was dramatic, gravelly voiced, and lent itself to a Pablo Escobar style. The very concept behind the drug lord’s speech was almost certainly a reference to Escobar’s Plata o plomo or “Silver or lead”.

This influence could greatly affect the change of pace behind the game, past Ghost Recon games have typically been of late, fraught, rapid affairs. Races against time against terrorists and revolutionaries. It will be a different feel fighting a force that owns a country, whether by greed or fear. It’s something that’s going to take finesse, and caution.

Judging from the trailer shown this could be a much darker game than Ghost Recon has presented to us in the past. Whilst there were always hints of the darkness at large in previous games (there would have to be with the topics covered) it’s never been up front and visible before. It’s looking like this game could put the butchered civilians in your face, it would be interesting to see how Bolivia reacts to the presence of the Ghosts and the impact they’ll have on the governing forces there.

Ubisoft followed up the trailer with the usual talk about teamwork that has been ever present in the Ghost Recon series. The difference was stressed between the close confines of the most recent Rainbow Six iteration and the wide open spaces of Bolivia. Co-Operation it would seem is going to be vital in this new imagining of the series. Talk was heavy about the need for tandem co-operation, with simultaneous strikes taking place in different areas.

The stunning vistas of Bolivia in HD glory

It’ll increase the need for vehicle usage, something that’s been pushed since reveal. We’ve seen buggies, dirt bikes, and now helicopters. Transport is going to be key in crossing the large spaces, especially with an area simply described as “the largest open-world environment the company has ever created”.

Ubisoft then released what felt like an edited video of free form gameplay. The game looked fantastic, the attention to detail was absolutely phenomenal providing a sense of immersion rarely felt in a Ghost Recon game. In order to maintain the sense the team went to Bolivia for two weeks and acquired the services of the local population to make the country as realistic as it could possibly be.

I won’t go too much into the Gameplay since there’s a video I’ll post right below this, but what it shows, even this early is impressive. Everything seems to handle with a realistic weight, the motion capture is smooth, fluid and human, the weapons seem to buck and kick with something akin to realism.

The graphics are spectacular, especially in regards to a third person shooter where the zoomed out perspective tends to put detail a bit further down the list, but it’s there. The gameplay started slow, classic stealth Ghost Recon action, heavily reliant on co-operation, but it rapidly kicks up a notch, the AI on show was on top form, utilising every available escape route and method.

It was here we saw the greatest change in direction. Each member of the team was forced to become a self-contained, self-reliant unit. The Co-Operative aspect whilst still integral to the mission fell away as each person had to suddenly find their own methods of completing a mission on awry.

It was so smooth as to be completely astounding. The game world reacted in a plethora of ways, each one as chaotic and unpredictable as the last. Some of it isn’t new to a Tom Clancy game, but some of it is, everything in the gameplay footage came together in a glorious tableau of co-operative, free-form tactical warfare. It’ll be exciting to see how the game develops once released, but if everything is to be believed March 7th will be a busy day for Ghost Recon fans.