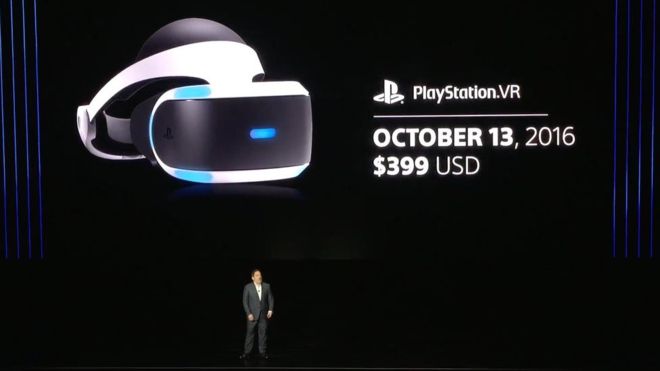 Yesterday Sony announced to the world at E3 their plans for the year ahead and what is soon to be released. The presenter explained that the Sony VR will be available to the public on October 13th 2016 to accompany the processing power of the (over 40 million units sold worldwide) PS4.

Over 50 games will be released on VR upon launch in October up until the end of 2016.

The PlayStation VR will be priced at $399 USD, which is quite steep when you consider that it is an add-on for a console

Resident Evil 7: Biohazard
This will be available 24 Jan 2017 and will be in VR from beginning to end.

Farpoint by Impulse Gear
Which looks like a cross between Gears of War and Halo if the reveal is anything to go by.

Starwars Battlefront: X-Wing VR Mission
I do not think this needs to be explained in any way; you are in an x-wing, in virtual reality, nuff said!


Final Fantasy 15
Confusing teaser highlighted the fact that PS VR owners will exclusively be able to play as Prompto, available 30/9/2016.

Crash Bandicoot
Sony explained they will be bringing back original, Crash 2 and Crash: Warped fully remastered for PS4. Crash will also be appearing first in Skylander: Imaginators, in which you will have the power to create your own Skylander. Available, October 2016

So if you are a Sony aficionado with a large amount of cash burning through your pocket lining then the future is looking quite rosy!